When Mila Sneddon had the chance to speak to the Duchess of Cambridge, the first thing she wanted to know was if the royal owned a princess costume.

Kate, well-versed in talking to little ones, admitted that although she wasn’t in costume, she’d be sure to find a pink one – Mila’s favourite colour – for their first meeting.

“I have to make sure I go and try to find myself a pink dress so that when one day hopefully, Mila, we’ll get to meet, I’ll remember to wear my pink dress for you,” Kate told the little girl.

Mila became a symbol of the isolation of lockdown last year when a picture of her was featured in Kate's poignant photography project, Hold Still.

The moving image showed the four-year-old kissing the kitchen window as her father, Scott, stood outside.

Mila, who is undergoing chemotherapy for leukaemia, was separated from her dad and older sister, Jodi, for seven weeks to prevent them from potentially bringing the coronavirus into the family home.

Footage has now been released of the brave little girl having a phone call with the duchess.

Kate replied. "What are their names – can you remember?"

"Louis has got so big now – he's very quick running around," the duchess said. "And he's on his little scooter as well. He's very quick. I can't keep up with him!"

Mila shared that she also liked to play on her scooter but her favourite activity was walking her dog, Mr Cole. The image of Mila and her father, taken by her mother Lynda, was entitled Shielding Mila, and was one of 100 pictures selected for Kate’s photography initiative. (CREDIT: Youtube/The Duke and Duchess of Cambridge)

The footage was released on the Cambridges’ newly established YouTube channel to mark the publication of Kate's new photography book.

The Duchess of Cambridge launched a campaign during the first coronavirus lockdown in 2020 for members of the public to share images capturing everyday life during the isolation period.

It proved so successful that she announced in March this year that she would be publishing 100 of the most “poignant and personal” portraits from the 31 000 entrants in her book, Hold Still: A Portrait of Our Nation in 2020.

Kate released a short video showing the inside the book just one day after Meghan Markle revealed that she would be releasing children’s book, The Bench, which focuses on the relationship between a father and son.

Fans of the Duchess of Cambridge have already accused her sister-in-law of “trying to upstage” her with the timing of her book.

But the social media comments were also filled with widespread support for the touching initiative.

“We are so proud of our Duchess of Cambridge,” one Twitter user wrote. “It’s an amazing initiative.”

Another added: “This book looks amazing. ”But Meghan and Kate are hardly the first royals to try their hands at being an author.

Sarah Ferguson, The Duchess of York, is already the author of more than 25 books, including Budgie the Little Helicopter and the Little Red series and recently signed a publishing deal for seven new books.

The Budgie series – which charts the adventures of a little hero helicopter who rushes around rescuing people – became a lucrative creation for the duchess, and the books were turned into a TV cartoon. 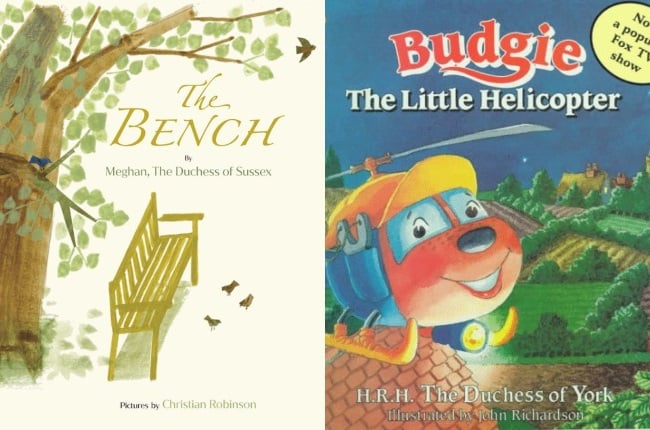 We live in a world where facts and fiction get blurred
In times of uncertainty you need journalism you can trust. For only R75 per month, you have access to a world of in-depth analyses, investigative journalism, top opinions and a range of features. Journalism strengthens democracy. Invest in the future today.
Subscribe to News24
Next on You
Meghan Markle is mocked for her 40x40 birthday video