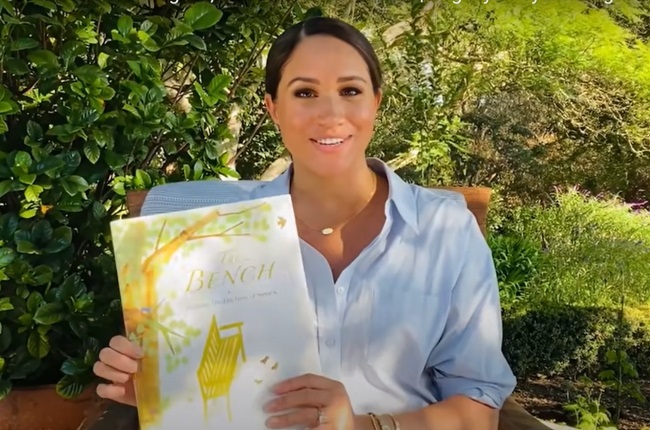 She looked laidback as she read from her newly published children's book, dressed simply in a white blouse and blue jeans.

But Meghan Markle added some sparkle to her ensemble in the form of jewellery worth nearly R7 million.

Meghan’s dazzling accessories included a Cartier Tank watch, which once belonged to Princess Diana, worth $23 000 (R347 996,90), the Daily Mail reports. Sitting in what appears to be the garden of the Montecito mansion she shares with Prince Harry (37) and children Archie (2) and Lilibet (four months), Meghan explained the inspiration behind the book. “I wrote this as a poem for my husband and our son Archie, and then turned it into a book so you could enjoy it too.”

The 40-page paperback explores the “special bond between father and son” as “seen through a mother’s eyes”.

The Bench costs around R279 and features illustrations by celebrated artist Christian Robinson. But not even the input of an award-winning illustrator could save the book from harsh criticism.

Shortly after its release in June, critics branded it a “vanity project” and a “bland self-help manual for needy parents”.

Meghan’s labour of love struggled to make it onto the bestseller list, coming in at 40 on Amazon’s rankings.

During the first week of its release, it sold just 3 212 copies while Manchester United’s Marcus Rashford, who released his book entitled You Are A Champion around the same time, sold 10 564 copies. It did fare better in the picture book rankings, topping those charts, but the book has received poor ratings. Alongside a one-star review, the Telegraph’s Claire Allfred calls it “bland”.

“The duchess' first children's book is all bland parenting ‘wisdom’ and no story – and it's hard to imagine any child enjoying it,” she wrote. "It shows Harry's role in this marriage is to sit on his bench holding the baby while Meghan gets on and conquers the world."

She also pans the book's grammar. "One wonders how any publisher could have thought to publish this grammar-defying set of badly rhyming cod homilies.

Alex Connell from The Times doesn't mince his words either: “You half wonder if the writing job was delegated to a piece of furniture . . .”

It’s not known whether Meghan received an advance for the book but a branding expert previously said the duchess likely pocketed more than R10 million.

We live in a world where facts and fiction get blurred
In times of uncertainty you need journalism you can trust. For 14 free days, you can have access to a world of in-depth analyses, investigative journalism, top opinions and a range of features. Journalism strengthens democracy. Invest in the future today. Thereafter you will be billed R75 per month. You can cancel anytime and if you cancel within 14 days you won't be billed.
Subscribe to News24
Related Links
Prince Harry and Meghan enter the world of high finance with new banking venture
Big deals in the Big Apple: Inside Prince Harry and Meghan's glamorous New York trip
Love them or hate them the Sussexes' status as icons who shake things up is confirmed
Next on You
Sarah Ferguson will spend the holidays with the royal family for the first time in 30 years