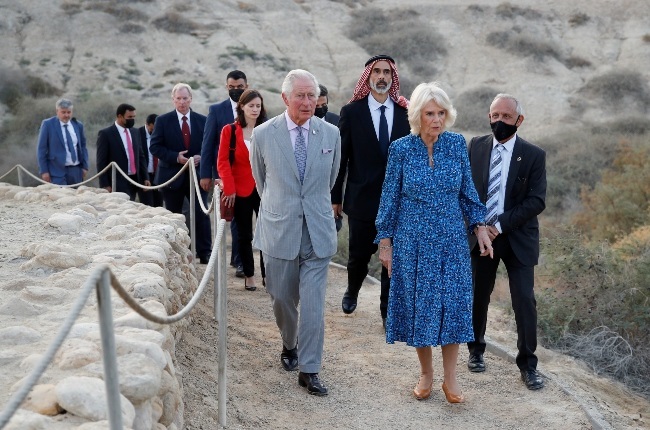 Prince Charles and Camilla, Duchess of Cornwall, visit the Elijah's Hills in Jordan, near the spot that Christians believe was the baptism site of Jesus. (PHOTO: Gallo Images/Getty Images)

The Prince of Wales, who turned 73 last week, is reportedly flying five or six bottles of Holy water taken from the River Jordan back to the UK for future royal christenings.

During their current whirlwind tour of the Middle East, the heir to the throne and his wife, Camilla, Duchess of Cornwall, were seen dipping their fingers in the water where Christians believe Jesus was baptised by John the Baptist.

Royal babies are traditionally welcomed into the church with water from the sacred river which is placed in the ornate silver gilt Lily Font, which is part of the Crown Jewels, for baptismal ceremonies.

The font dates back to the time of Queen Victoria and has been used for all royal christenings except for Princess Eugenie of York, the daughter of Prince Andrew and Sarah Ferguson. because he parent opted to forego the traditional ceremony and opt for a public service instead. But it has been used for all three of Prince William and Kate, Duchess of Cambridge's offspring and it seems Charles is keen to replenish supplies of the holy water so the tradition can continue. Charles dips his hand into the sacred water of the River Jordan. (PHOTO: Gallo Images/Getty Images)

“The Embassy people asked for a few dozen [bottles] of Holy water and we provided them with five or six dozen,” the director general of the baptism site, Rustom Mkhjian, told the UK’s Daily Mail.

He said he was not aware exactly who they would be used for. “I don’t know, I didn't want to ask. But they said we wanted it for children to be baptised later on. Future baptisms, yes.” Charles and Camilla share a solemn moment during their visit to the holy landmark. (PHOTO: Gallo Images/Getty Images)

It’s believed the water could be used in the upcoming christenings of Princess Beatrice's new daughter, Sienna Elizabeth, and her sister Princess Eugenie’s son, August, who was born in February.

Although Prince Harry and Meghan Markle’s son, Archie, was baptised in a secret ceremony at Windsor Castle in 2019 with the special water, it’s still not known where and when their five-month-old daughter, Lilibet, will be christened.

“It is pure water blessed from the spot where Jesus was baptised by John the Baptist. It is holy and blessed from this particular spot in the Hashemite Kingdom of Jordan.”

Charles and Camilla's trip to Jordan and Egypt is the first full-scale official royal tour since Covid struck. 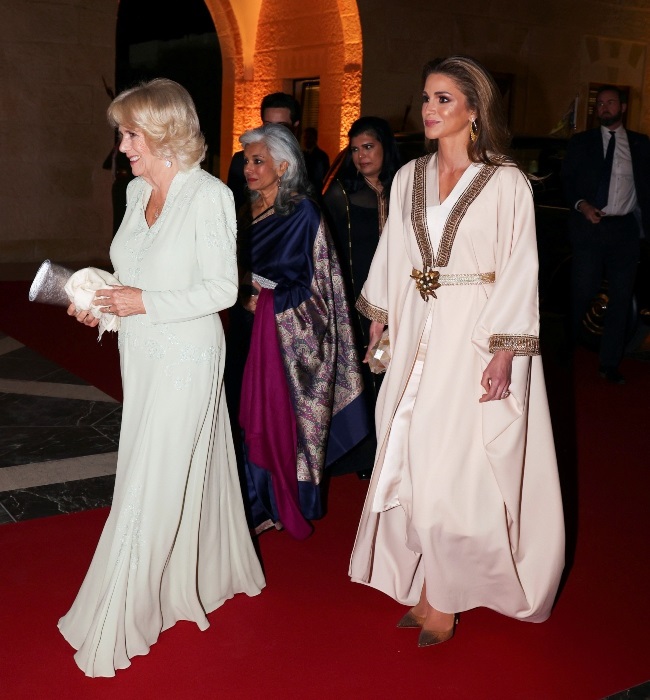 Camilla was the picture of elegance in white for a dinner gala at the Al Husseiniya Palace. (PHOTO: Gallo Images/Getty Images)

In keeping with Charles’ eco-friendly stance, he and Camilla flew into Amman, the Jordanian capital, on the UK government's official RAF Voyager plane which was, for the first time, using “green” sustainable aviation fuel made by extracting waste oils from crops, cooking, forestry and paper manufacturing and mixing it with kerosene.

On their official Clarence House Instagram page they shared pictures of the warm welcome they received from Jordan's King Abdullah II at the beautiful Al Husseinieh Palace as well as a visit to Queen Rania’s Family and Child Center which offers support to vulnerable children.

We live in a world where facts and fiction get blurred
In times of uncertainty you need journalism you can trust. For 14 free days, you can have access to a world of in-depth analyses, investigative journalism, top opinions and a range of features. Journalism strengthens democracy. Invest in the future today. Thereafter you will be billed R75 per month. You can cancel anytime and if you cancel within 14 days you won't be billed.
Subscribe to News24
Next on You
Queen Camilla: inside the life of a reluctant royal