The Sussexes, seen here during their recent tour of New York, have thrown their hat into the world of ethical investment banking. (PHOTO: Gallo Images/Getty Images)

They have vowed to “change the world” and that’s exactly what the Sussexes are aiming to do with their latest business move into the world of ethical investment banking.

And that’s exactly what the Sussexes are doing with their latest business venture: ethical banking.

Fresh off the back of their whirlwind New York trip where Harry and Meghan met with United Nations bigwigs and spread their message of global vaccine equity comes the news that the couple have been appointed “impact partners” at Ethic.

The New York-based company prides itself on investing only in businesses that meet their “social responsibility criteria”, which include racial justice, fair workplace practices and climate change. The couple announced the move with a statement: “When we invest in each other we change the world.”

Meghan (40), in a joint interview with Harry for the New York Times, said, “In the world I come from, you don't talk about investing, right? You don't have the luxury to invest. That sounds so fancy.

“My husband has been saying for years, ‘Gosh, don't you wish there was a place where if your values were aligned like this, you could put your money to that same sort of thing?’”

It's not yet known how much the couple have invested or if they're being paid a salary for their roles as "impact partners".

Ethic was founded in 2015 by fellow Briton and Harry lookalike Jay Lipman, along with Australian bankers Doug Scott and John Mair. Lipman, a University of Edinburgh graduate, has described his team as hippies and says he “loves hippies” to invest in them.

Meanwhile Scott, who was raised by “two forward-thinking social and environmental activists”, according to Ethic’s website, has been listed on the Forbes 30 under 30 list.

Mair has led teams at several “high-growth startups” including BlackRock and Goldman Sachs.

All three worked for big banks such as Deutsche Bank and JP Morgan before having a change of heart and focussing on the need for ethical funds, now one of the fastest growing sectors of investment banking.

Since quitting their royal roles and moving to the US last year, the Sussexes have already signed a $100 million (R1,5 billion) deal with Netflix to produce documentaries and series on topics close to their heart, as well as a $25 million (R375 million) deal with Spotify to host and produce podcasts  that “drive powerful conversations that inspire, challenge and educate”. 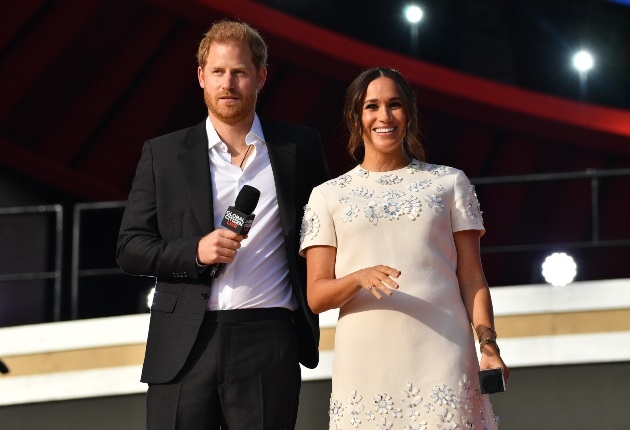 The couple were a crowd favourite at the Global Citizen Live event in New York where they spread the message of global vaccine equity. (PHOTO: Gallo Images/Getty Images)

In July it emerged they’d signed a multi-book deal worth $20 million (about R300 million) with publisher Penguin Random House, which will see Harry (37) releasing his first memoir in December.

Brand Sussex it seems is growing stronger by the day.

Meanwhile, in other Harry and Meghan news, inside sources say the couple are “highly unlikely” to bring their four-month-old daughter, Lilibet, to the UK to be christened.

It was previously thought they would bring her to Windsor Castle to be christened in the Church of England like her two-year-old brother Archie, but it seems this idea has been scrapped.

Instead it appears they’ll have a service at the Episcopal Church in the US – and rumour has it Michael Curry, the head of the church and the pastor who delivered the sermon at the Sussexes’ wedding, might officiate at the christening.

We live in a world where facts and fiction get blurred
In times of uncertainty you need journalism you can trust. For only R75 per month, you have access to a world of in-depth analyses, investigative journalism, top opinions and a range of features. Journalism strengthens democracy. Invest in the future today.
Subscribe to News24
Next on You
British authorities drop investigation into Prince Andrew’s sex abuse case