Queen Elizabeth's daughter put her best fashion foot forward as she stood in for her mom as host of the annual Not Forgotten Association Annual Garden Party for military veterans at Buckingham Palace in London.

Princess Anne exuded elegance in a flower-print lilac and green overcoat. She paired the striking coat with a simple purple skirt and matching hat.

The 71-year-old completed her look with a pearl necklace and earrings and a pair of dark gloves.

She hosted the event in place of Queen Elizabeth, who was forced to pull out due to increasing issues with her mobility which has made it a struggle for the monarch to walk.

Each year the queen hosts three garden parties at Buckingham Palace and one at the Palace of Holyroodhouse, the official residence of the British monarch in Scotland, to celebrate and reward those in public service. 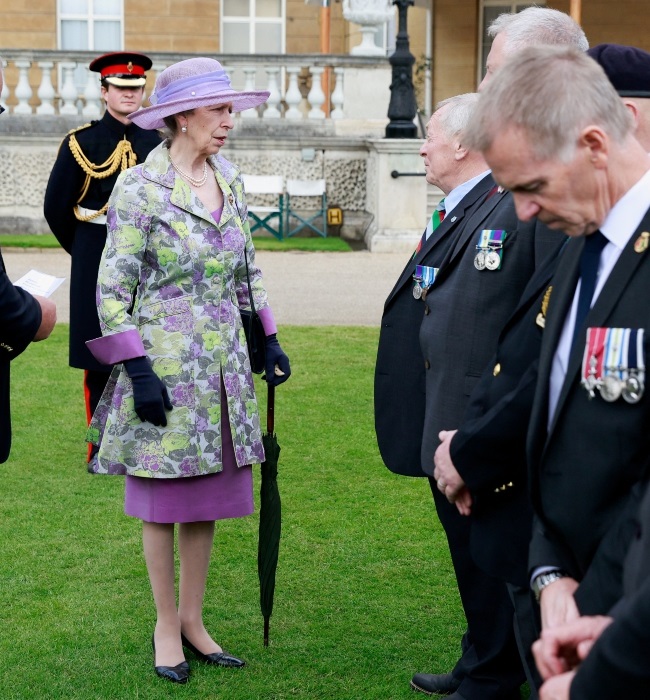 Though she’s not exactly considered the trendsetter of the royal family, Anne has repeatedly proven she’s no slouch in the style department. We take a look at her style through the years.

Anne stood out from the crowd in a canary yellow ensemble that also showed off her toned legs at the Bath and West Agricultural Show. The princess stood out in this bright outfit. (PHOTO: Getty Images)

She wore a show-stopping white dress with statement sleeves when she arrived for an event at the Dorchester Hotel in London. Her hair was swept back to display the jewels adorning her neck and ears. Even her maternity style was chic. The princess wore an understated but stylish cape coat when she was pregnant with her daughter, Zara Tindall, in 1981. For a pop of colour, she donned a striped blue turban with a matching shirt. Anne with her ex-husband, Mark Phillips, in 1981, weeks before her daughter Zara’s birth. (PHOTO: Getty Images)

Anne looked sophisticated in a light pink coat with matching skirt and shoes at the Veterans Parade, completing the look with a statement hat. The princess wore hues of brown to the first day of Royal Ascot. Her hat was decorated with feathers. She stayed warm and stylish in a blue tweed coat paired with a navy hat and matching gloves at a national racing event at Aintree Racecourse. The princess was winter-ready in her trench coat and wool gloves. (PHOTO: Getty Images)

When Prince Harry wed Meghan Markle, Anne wore a crimson and navy-blue coat that was cinched at the waist. Though it was a hit with some, others compared her outfit to the robe famously worn by the late Playboy founder Hugh Hefner.

We live in a world where facts and fiction get blurred
In times of uncertainty you need journalism you can trust. For 14 free days, you can have access to a world of in-depth analyses, investigative journalism, top opinions and a range of features. Journalism strengthens democracy. Invest in the future today. Thereafter you will be billed R75 per month. You can cancel anytime and if you cancel within 14 days you won't be billed.
Subscribe to News24
Related Links
20 engagements in four days – is Princess Anne the hardest working royal?
Burgers, chocolate biscuit cake, extra spicy curry – see what these royals turn to when they want...
‘You're very sexy’: young boy is smitten with Princess Anne
Next on You
Just call her GI Kate! The Duchess of Cambridge posts never-before-seen photos