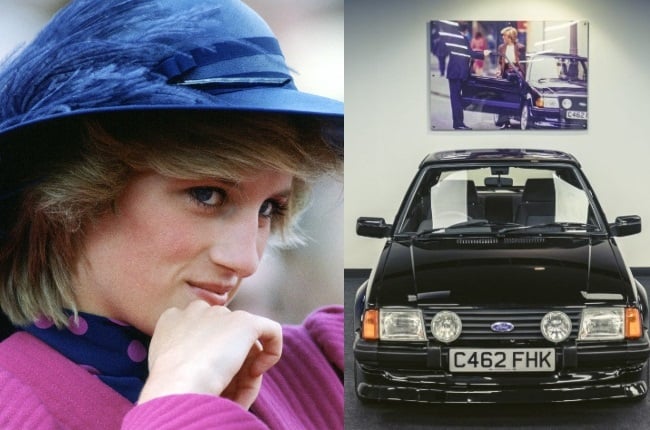 Princess Diana loved her Ford Escort RS, which is now, 25 years after her death, set to be sold at auction. (PHOTO: Gallo Images/Getty Images/Twitter_silverstoneauc)

Princess Diana insisted on keeping her trusty Ford during her years as a young royal mother, shunning the far fancier cars usually preferred by the royals such as Rolls-Royce and Daimler.

And she’d often be spotted zipping around London in it, usually on her way to a girls’ lunch, shopping trip or outing with the two young princes.

The car spent years in private ownership but was more recently in a Ford RS collection, where it's been kept in mint condition. Diana, who had a love of cars, reportedly insisted on buying the vehicle but before she took ownership it was given a special "stealth makeover" by Ford's Special Vehicle Engineering department.

It was fitted with a regular five-slat front grille, rather than the usual three, a second rear-view mirror for the protection officer who usually accompanied the princess, and a radio in the glove box.

“Parallels could be drawn with the RS Turbo’s reputation as the People’s Sports Car and the honorific of People's Princess bestowed by the British public on Princess Diana,” the auctioneers say.

“The RS Turbo was never designed to be driven by the wife of the second-in-line to the British throne, nor to transport the future king.

“We note with interest that while Diana’s later choice of luxury cars may have been more expensive when new, but the Ford Escort RS Turbo far outperforms them at auction, selling in some cases for three times the price of equivalent models.”

Diana also owned a 1981 Ford Escort 1.6 Ghia sedan, which was sold on auction to a museum in South America for £52 640 (just over R1 million). That's a hefty sum for a modest Ford runabout. The car was an engagement present from Prince Charles in May 1981 and sported a silver frog hood ornament, a copy of a gift from her sister, Lady Sarah Spencer, which was inspired by the Brothers Grimm fairytale The Frog Prince.

We live in a world where facts and fiction get blurred
In times of uncertainty you need journalism you can trust. For 14 free days, you can have access to a world of in-depth analyses, investigative journalism, top opinions and a range of features. Journalism strengthens democracy. Invest in the future today. Thereafter you will be billed R75 per month. You can cancel anytime and if you cancel within 14 days you won't be billed.
Subscribe to News24
Next on You
Harry and Meghan pose a very real threat to the royal family, bombshell book claims