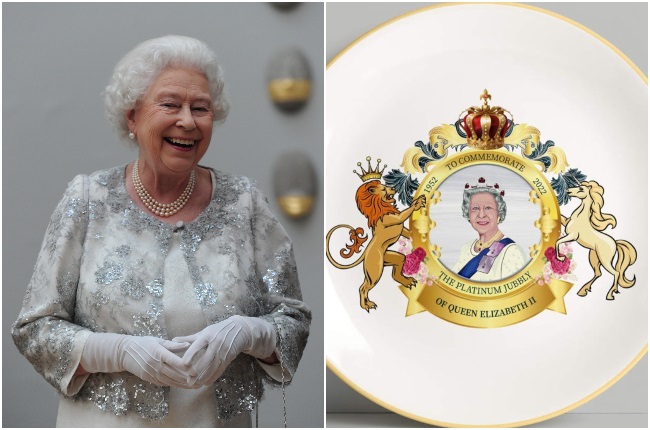 As Britain gears up to celebrate Queen Elizabeth’s platinum jubilee this year, more than 10 000 commemorative mugs, tea sets and plates have rolled off the production line featuring a glaring error.

The items are emblazoned with an illustration of the queen and a plaque meant to read, “To commemorate the platinum jubilee of Queen Elizabeth II.”

But someone got it very wrong and the crockery instead proclaims, “To commemorate the platinum jubbly of Queen Elizabeth II.”

The souvenirs, which were made by a manufacturer in China, were meant to go on sale as the UK celebrates the 70th year of the queen's reign, which makes her the first monarch in British history to reach such a momentous milestone. The souvenirs, made in China, were printed with Platinum "Jubbly" rather than Platinum Jubilee. (PHOTO: Wholesale Clearance UK)

But luckily for the importer it’s not going to be saddled with the problem. Wholesale Clearance UK, a company that sells surplus stock as well as end-of-line clearances, has offered to take all the crockery.

It’s now selling all the memorabilia, advertising it as "souvenir stock with slight typo mistake" at £3 (about R62) each – which represents a 90% discount on the original price the importer planned to charge.

"Become an Only Fools and Horses fan and wow your friends with your lovely jubbly set!" Wholesale Clearance UK proclaims on its website – a reference to the catchphrase from the ’80s BBC sitcom Only Fools and Horses used by the character Del Boy who was famous for his money making schemes.

"What could be more unique than our limited-edition misprinted crockery?" company boss Karl Baxter told the BBC of the items, which are collectively worth £32 400 (about R670 000). "This could be your chance to get your hands on a novelty souvenir for a fraction of the price.” This item, which the manufacturer says "keeps your royal tea warm," was also made to mark the occasion. (PHOTO: Wholesale Clearance UK)

But celebrations are scheduled for the British summer with a four-day holiday, including lighting of beacons, concerts, parties, pageants and picnics and a National Thank You Day starting on 2 June.

Meanwhile Wholesale Clearance is hoping to cash in and predicts its haul of misspelt crockery will set like hot cakes.

On the website it suggests that customers take up “plate spinning as a hobby”.

“I think the online trader rejected the items pretty much straightaway, but in hindsight, with the exposure it's getting, they're probably wishing they didn't,” Wholesale Clearance staff member Andy White told PA news.

“Their loss will be someone else's gain.”

This isn't the first time royal merchandise has caused a stir. Ahead of Prince Harry's wedding to Meghan Markle in 2018 a plate was released that showed her posing with singer Ed Sheeran instead of her groom, although the seller claimed it was a deliberate joke.

And ahead of Prince William’s wedding to Kate Middleton in 2011, commemorative mugs were released that showed Kate with Harry.

We live in a world where facts and fiction get blurred
In times of uncertainty you need journalism you can trust. For 14 free days, you can have access to a world of in-depth analyses, investigative journalism, top opinions and a range of features. Journalism strengthens democracy. Invest in the future today. Thereafter you will be billed R75 per month. You can cancel anytime and if you cancel within 14 days you won't be billed.
Subscribe to News24
Related Links
Let it snow: royals in a winter wonderland
Kate at 40: how the Duchess of Cambridge is coming into her own as she moves into a new decade
Her Mini-Majesty – the two-year-old girl who’s been dubbed the queen’s double
Next on You
As Prince William turns 40, he celebrates in a way that would've made Princess Diana proud