SEE THE PICS: Cheers and boos for Prince William and Kate as they take in some NBA action amid royal race row Prince William and Kate, Princess of Wales, were spotted at a Boston Celtics basketball game in the US. Next to Kate was Emilia Fazzalari, wife of Wyc Grousbeck, one of the team's owners. (PHOTO: Gallo Images/Getty Images)

Prince William and Kate, Princess of Wales, drew a mixed response as they attended a basketball match in the US.

The couple joined 20 000 screaming fans in the TD Garden stadium in Boston, Massachusetts, to cheer on the Boston Celtics on Wednesday. They sat courtside next to one of the team’s owners, Wyc Grousbeck, his wife, Emilia Fazzalari, and Boston mayor Michelle Wu.

They were greeted with loud cheers as their presence was announced in the stadium and shown on the big screen, and managed to keep smiling as a few faint boos were heard too. William gets to grips with a basketball as Massachusetts Governor-elect Maura Healey looks on. (PHOTO: Gallo Images/Getty Images) 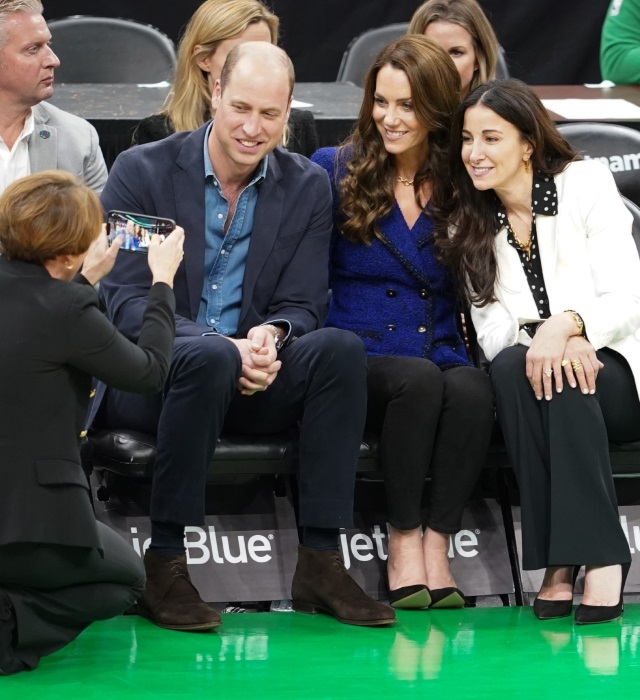 Kate and William grin as Emilia Fazzalari and her husband Celtics owner, Wyc Grousbeck, stand to applause wildly in the match between the Boston Celtics and the Miami Heat. (PHOTO: Gallo Images/Getty Images)

The royals have found themselves part of another scandal this week after the queen’s former lady-in-waiting and William’s godmother Lady Susan Hussey (83) resigned after becoming embroiled in controversy.

Susan left charity founder Ngozi Fulani feeling violated after she repeatedly asked her where she was “really from” at a charity event at Buckingham Palace.

Ngozi (61), who was born in London to Caribbean immigrant parents, claims Susan moved her hair to check her name badge and persistently questioned her over where her “people” came from, despite having been told she was a British national. 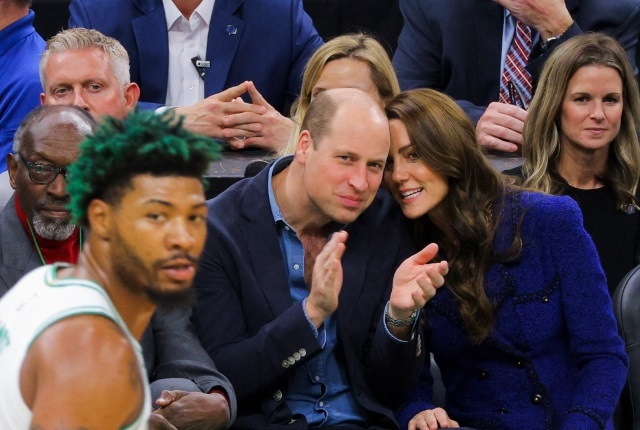 Kate leans over to get a better view of the court action. (PHOTO: Gallo Images/Getty Images) The couple make their glamorous exit from a plane after arriving in the USA in the first trip since 2014. (PHOTO: Gallo Images/Getty Images)

Susan has since apologised for her “unacceptable and deeply regrettable comments” and the palace released a statement saying, “We take this incident extremely seriously and have investigated immediately to establish the full details.”

But the incident has cast a shadow over William and Kate’s first trip back to the US in eight years. The Prince and Princess of Wales along with Governor Elect Maura Healy (second right) and Boston mayor, Michelle Wu, formally kick off the Earthshot Prize by lighting up the Boston City Hall on 30 November. (PHOTO: Gallo Images/Getty Images)

The royals are in the country for William’s annual Earthshot Prize. The environmental initiative is one of the biggest in the world and is celebrated at a star-studded gala in Boston's MGM Music Hall, which will see five winners each being awarded £1 million (R21,5m) for their efforts to help save the planet.

Who is Lady Susan Hussey?

Susan Katharine Hussey, Baroness Hussey of North Bradley, was one of the queen's closest confidantes, serving as her lady-in-waiting for 60 years. It was she who accompanied Elizabeth in her state Bentley as it followed Prince Philip’s hearse during his funeral last year.

One former aide described Susan as “quite terrifying” and “the one lady-in-waiting you’d never want to cross”, according to British newspaper The Telegraph.

This isn't the first time she's made controversial comments. In 2018, a few months before the wedding of Prince Harry and Meghan Markle, Susan reportedly told a group of theatre executives during a lunch that their marriage “will all end in tears – mark my words”.

Last week it was announced she and other former ladies-in-waiting would now be known as ladies of the household and would help King Charles host formal events. It's from this position that she's now resigned.