The dress, the tiara, the flowers, the hair: all the dazzling details of Kate Middleton's wedding day From her dress, the designer, her shoes and make-up – we look at everything you want to know about Kate Middleton's wedding day look. (Photo: Getty Images/Gallo Images)

It was one of the best kept secrets in the world and when Kate Middleton finally revealed the gown in which she would become a princess it was the picture of perfection.

British designer Sarah Burton, creative head of renowned design house Alexander McQueen, has been heaped with praise for creating a dress generally considered a masterpiece of British craftsmanship and fashion flair. But Sarah is quick to point out Kate played a huge role in designing the gown, which looks similar to the one Grace Kelly wore when she married Prince Rainier of Monaco.

She and Kate worked closely to come up with something that’s a perfect blend of traditional and modern, modest and sexy, and accessible and regal.

And you’d be hard pressed to find someone who doesn’t think it’s a gown fit for a princess. The detail is exquisite – from the handmade lace covering her slender neck and arms to the delicately embroidered flowers bordering the dress.

Employees at The Royal School of Needlework (RSN) spent many hours making the lace appliqué for the bodice and skirt. The individual flowers – roses, thistles, daffodils and shamrock – were hand cut from lace then sewn onto the ivory silk tulle of the dress.

RSN employees washed their hands every half hour to keep the fabric pristine and needles were replaced every three hours to ensure they were sharp and clean. At the time they didn’t know for whom they were creating the embroidery and didn’t even know the designer’s name. Everything was planned in painstaking detail.

Sarah and her team spent weeks researching fabrics and the result is as sumptuous as you’d expect a princess’ wedding dress to be. The lace on the bodice and skirt is English and French Chantilly lace and the underskirt is silk tulle trimmed with Cluny lace.

The dress – made of ivory and white satin gazar(a loosely woven silk) – was cleverly constructed to accentuate Kate’s tiny waist. The corset-style bodice, made of ivory satin, and the padded hips are signature McQueen.

The skirt, which has intricate arches and pleats, was designed to look like an opening flower. Running down the back are 58 buttons covered in gazar and organza. The 2,7-metre-long train is in proportion to the dress as is the veil which is made of ivory silk tulle with hand embroidered flowers.

“I’m delighted the dress represents the best of British craftsmanship,” she said in a statement after the wedding. “We’re very proud of what we’ve created.”

The myrtle came from a bush planted by Queen Victoria in 1845. Queen Elizabeth II also had a sprig from the bush in her wedding bouquet as did Diana when she married Prince Charles. 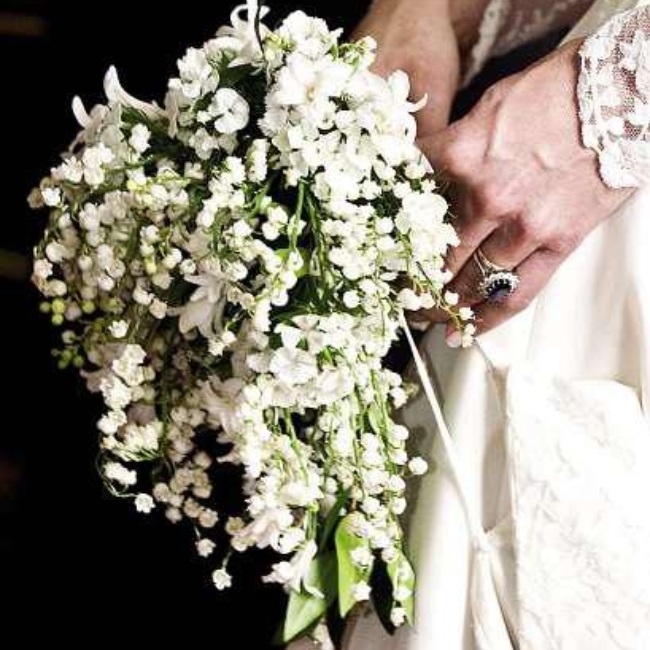 Kate’s wedding shoes were handmade by the team at Alexander McQueen. They’re made of ivory duchess satin with hand-embroidered lace, also done by staff at The Royal School of Needlework.

The Cartier Halo diamond tiara Kate wore was given to Queen Elizabeth II by the late Queen Mother. The Queen Mother received it as a gift from her husband in 1936. London-based jeweller Robinson Pelham designed Kate’s earrings.

Inspired by the new Middleton coat of arms, they feature diamond-set oak leaves and a suspended pavé diamond acorn. 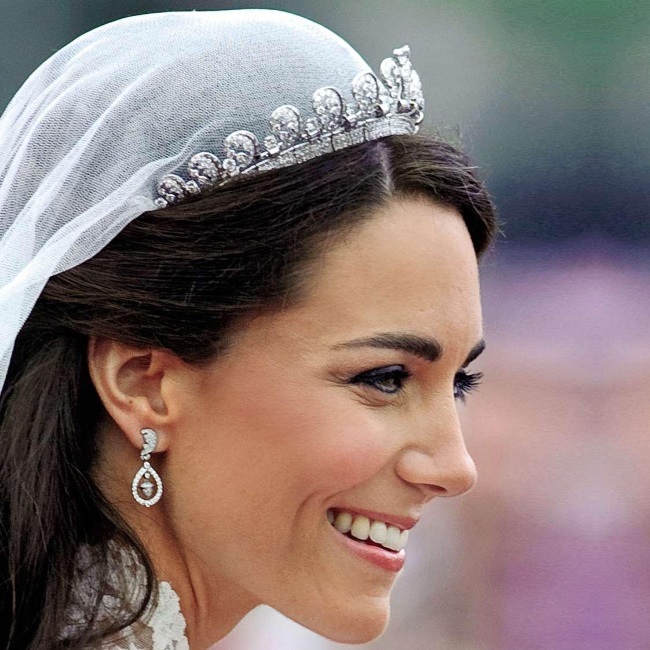 James Pryce, Kate’s hairdresser of eight years, was tasked with creating a look fit for a princess. “Kate wanted to look like herself,” says Richard Ward, owner of the salon where James works.

“It was all about the curls and soft waves.” They created mood boards with styles from which Kate could choose. They went with a half-up, half-down look called a demi-chignon for the ceremony and for the evening reception James let loose her locks.

They worked hard to create a look that would show off her dress and hold a tiara, Richard says. “It was styled off the shoulders so the detail on her dress would be shown.”

Kate did her own make-up and received a thumbs-up for her efforts. “The first glimpse behind the veil showed a slightly heavier make-up than we’ve been used to with more emphasis on the eyes,” beauty journalist Elsa McAlonan says. Kate did her own make-up and received a thumbs-up for her efforts. (Photo: Getty Images/Gallo Images)
We live in a world where facts and fiction get blurred
In times of uncertainty you need journalism you can trust. For only R75 per month, you have access to a world of in-depth analyses, investigative journalism, top opinions and a range of features. Journalism strengthens democracy. Invest in the future today.
Subscribe to News24
Next on You
Queen’s daughter-in-law Sophie says Prince Philip’s death ‘left a giant-sized hole’ in the family