BEST OF 2021 | The name, the birth, the hope: all about Harry and Meghan's little Lilibet In a year marked with resentment and grief it was a much-needed dose of happiness.

Few people can resist being swept up in the joy a new baby brings and by all accounts many a stiff upper lip was softened by the arrival of little Lilibet Diana Mountbatten-Windsor – the queen’s 11th great-grandchild and her first since the death of her husband, Prince Philip, in April.

Prince Harry and Meghan kept the birth of their daughter a secret for a full two days, announcing the event on their Archewell Foundation website on the evening of Sunday 6 June.

“On 4 June we were blessed with the arrival of our daughter, Lili.

'She’s more than we could have ever imagined and we remain grateful for the love and prayers we’ve felt from across the globe.'

“Thank you for your continued kindness and support during this very special time for our family.”

Harry and Meghan are both now on “paternal leave”, a tweet from journalist Omid Scobie – who wrote the book Finding Freedom on the couple – said.

Lili, who arrived six days before what would’ve been Philip’s 100th birthday, brings happiness after the heartache of Meghan’s miscarriage last year and the royal family were quick to congratulate them.

“We are all delighted by the happy news of the arrival of baby Lili. Congratulations to Harry, Meghan and Archie,” Prince William and Kate said.

Buckingham Palace also sent out a message. “Congratulations to the Duke and Duchess of Sussex on the birth of Lilibet Diana! The queen, the Prince of Wales and the Duchess of Cornwall are delighted with the news.”

A source close to the couple says becoming a family of four is “what they’ve always wanted”.

However, it seems there will no more little Sussexes. “Two, that’s it,” Harry has said.

WHAT’S IN THE NAME? Calling their daughter after her great-grandmother and grandmother is being seen by royal experts as the couple’s way of extending an olive branch to the royal family following months of turmoil.

Harry cast the cat among the pigeons by voicing his unhappiness about life in the Firm in two sessions with Oprah Winfrey, claiming it drove Meghan to the brink of suicide. He also said he felt trapped in a life of duty and coldness.

But he’s never had anything but warm words for his grandmother and he adored his late mother – and both women are honoured in the name of his new daughter.

Lilibet is the queen’s childhood nickname and originated when she couldn’t pronounce her name – Elizabeth – as a toddler. Prince Philip also adopted it after he fell in love with the queen. After their wedding, he wrote a letter to her mother saying, “Lilibet is the only thing in the world which is absolutely real to me”.

Harry is understood to have informed Her Majesty that his daughter would be named in her honour before they went public with it.

“I’m told Harry had said to the queen he may name a daughter after her and so he didn’t really ask for permission as such but it was a nice surprise,” royal editor Russell Myers says.

“It can perhaps have healing powers. It’s been a turbulent time so this seems to be a tremendous gesture.”

Diana is, of course, a tribute to his mother, who would’ve celebrated her 60th birthday on 1 July.

Lili’s cousin, Princess Charlotte, also has Diana as one of her names. Lilibet was born at the Santa Barbara Cottage Hospital which was founded by 50 women in 1888. (PHOTO: Gallo Images/Getty Images)

not-for-profit facility in line with the couple’s pro-women stance.

It was founded in 1888 by a group of 50 women from the area who “recognised it was time for the growing community to have a hospital.”

Their birthing rooms feature reclining chairs, a rocking chair, a sofa, as well as a “birthing bed with lots of pillows for comfort”, according to the website.

Meghan would’ve also had her own Jacuzzi for hydrotherapy and a beautiful outside terrace for a change of scene during early labour. There’s also a menu for room service and a pantry stocked with snacks for moms and dads to help themselves. Harry and Meghan show off their newborn son Archie Harrison Mountbatten-Windsor during a photocall in St George's Hall at Windsor Castle on 8 May 2019. (PHOTO: Gallo Images/Getty Images)

Harry and Meghan were free to do pretty much what they pleased this time around, unbound by rules and conventions that go hand in hand with the birth of royal babies.

When Archie was born two years and one month ago, they were desperately unhappy and hell-bent on bucking the system. They tried to keep Archie’s birth a secret and not even royal aides were aware of the arrival until afterwards.

They refused to name the doctors who attended the birth – a no-no as far as royal protocol goes – and revealing their baby to the world on the steps of the hospital didn’t happen.

They came for a pounding from critics – but this time, there are no conventions to upset, no rules to break.

Lili tipped the scales at 3,4kg, slightly heavier than Archie’s 3,2kg birth weight. The little girl is also an automatic American citizen although as her father was born on British soil, she’s entitled to dual UK citizenship.

Her brother is also entitled to dual citizenship as the child of an American mother.

Archie is seventh in line to the British throne and his little sister eighth. Like her brother, she won’t carry a title – she’ll be Miss Lilibeth Diana Mountbatten-Windsor. Showing off her pregnancy style: for International Women's Day this year Meghan wore a dress from Reiss and a blazer by Alexander McQueen. (PHOTO: Gallo Images/Getty Images) Away from the public eye, the duchess was seen only a handful of times during her second pregnancy – a far cry from being always on display as she was with Archie.

A lover of laidback yet chic California style, Meghan opted to dress her growing bump in flowing designer gowns and pretty wrap dresses by some of her favourite American brands, such as Brandon Maxwell and La Ligne.

Her wardrobe for her second pregnancy was estimated to have cost over £67 582 (R1,28 million) – but it’s a far cry from the £514 000 (R9,8m) it cost to clothe her during her first pregnancy. As a working royal she wore a plethora of high-end designer outfits from labels such as Dior, Prada and Chanel. Now that she's in the US, Meghan has her mother, Doria Ragland – who lives in Los Angeles – close by to help. (PHOTO: Gallo Images/Getty Images)

When Meghan had Archie, she only had her mother, Doria Ragland (64) – who she flew over from Los Angeles – to lean on. Friends were in short supply.

Now it’s a different story. She’s back in her home country and just an hour’s drive from where Doria lives. The Sussexes have become friendly with their famous Montecito neighbours such as singer Katy Perry and British actor Orlando Bloom who also have a baby girl. (PHOTO: Gallo Images/Getty Images) The couple count Oprah Winfrey amongst their good friends in the US. (PHOTO: Gallo Images/Getty Images)

She and Harry have plenty of famous friends in the neighbourhood, including Katy Perry and her partner Orlando Bloom, and Oprah Winfrey.

It’s unclear at this stage when Harry’s family will see the latest addition to the family as they haven’t seen Archie since late 2019.

Meghan’s estranged father, Thomas Markle (76), remains out of the picture although the former lighting director sent his congratulations after Lili was born.

“Very pleased with the announcement of the safe and healthy delivery of my new granddaughter,” he said. “All my love and best wishes.” 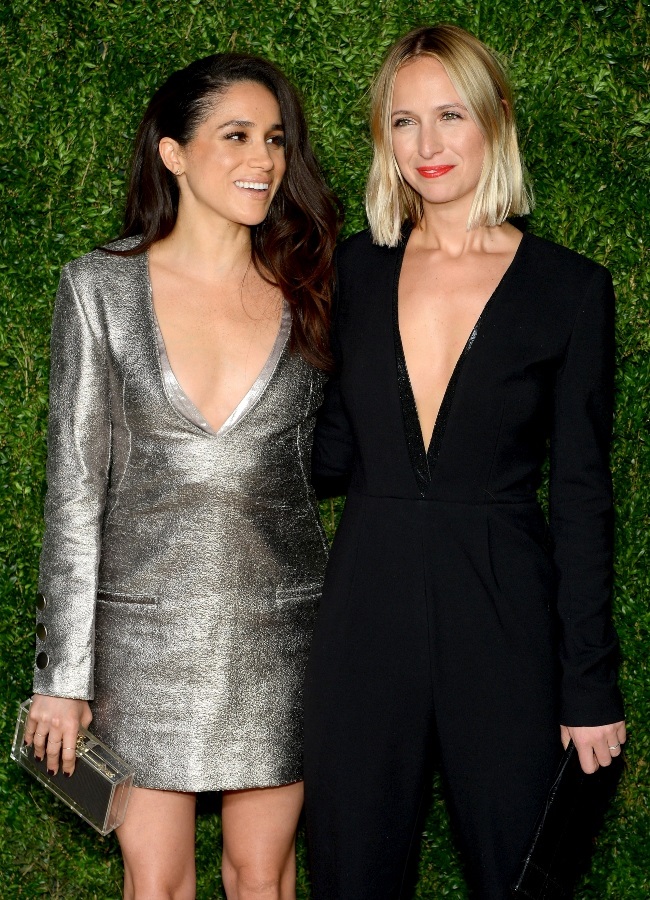 Meghan with her best friend, fashion designer Misha Nonoo who is said to be looking to move to the Sussexes' neighbourhood from New York. (PHOTO: Gallo Images/Getty Images)

Lili will also have the future baby of her mom’s best friend to play with one day.

Fashion designer Misha Nonoo is reportedly moving from New York to Montecito. She and her husband, oil heir Mikey Hess, have a son, Leo, who’s a year younger than Archie so there will someone for him to play with too.

Then there’s music producer David Foster (71) and his singer-actress wife Katharine McPhee (37). The couple, who are close to the Sussexes and have been spotted out dining together, welcomed their first child, son Rennie, in February.

LILI IN THE STARS

The new arrival is a Gemini like her great-grandfather Prince Philip and is being called his “royal twin”. Astrology experts say little Lili will live a more sparkly, “head in the clouds” life while big brother Archie, born in May, is a down-to-earth, steady Taurus like his great-grandmother the queen.

“Lili will be a people person, out there in the world, chatty and inquisitive. Very much an extrovert with an engaging personality that’ll draw people to her.

“She’ll possess a warm nature and a capacity to connect with others, using her sensitivity to help and influence their lives for the better.”

The tot has her moon in fiery Aries, Debbie adds, so she’s certain to know what she wants.

'She could well be quite bossy with her brother, but she’ll also have a sensitive streak, with a vivid imagination.'

Local numerologist Sandy Smith says the connection between the Sussex siblings will be “100%”.

“However, Lili will have a lot more maturity than Archie, she says, adding Lili will be a powerful character like her mother.

“She was born on the fourth day of her month, as was Meghan [4 August], who’s taken charge of her family and their lives. Lili is set to be the author of her life in the same way – and she’s going to make a fortune.”

When it comes to her career, astrologer Emili Adame believes Lili will be drawn to creativity and technology.

“She’ll be organised when it comes to financial planning but patience won’t be her strong suit," Emili shared with ToDiForDaily.com.

“She will, however, have a caring and sensitive heart like her grandmother, Princess Diana. I also see that Lili will have some of the same energetic lessons on her life journey as her father."