Her Majesty with one of her favourite dogs at the Badminton Horse Trials in 1976. (Photo: Gallo Images/Getty Images)

It certainly hasn’t been an easy time for the British royal family when it comes to their cherished pets.

Just a few weeks after the Duke and Duchess of Cambridge announced their family dog, Lupo, had gone up to doggy heaven, the queen is mourning the loss of one of her last two remaining dogs, Vulcan.

The dorgi (a dachshund-corgi cross) had been with her since 2007, making him about 13 years old. 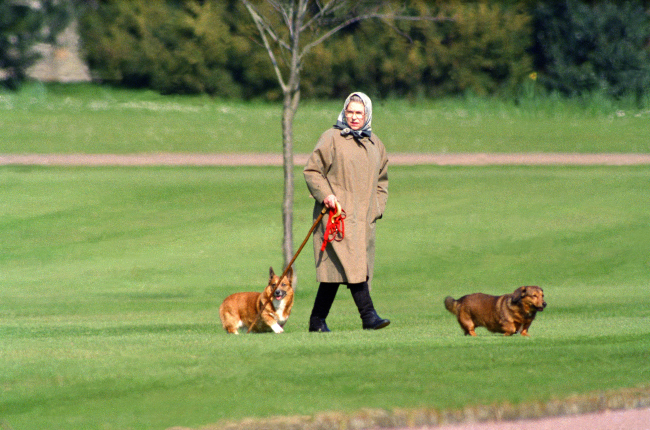 The queen walks her dogs in the grounds of Windsor Castle in April 1994. (Photo: Gallo Images/Getty Images)

Sources say the loss of her faithful companion has been a huge blow to the 94-year-old monarch, who has had a tough year with the challenges of Covid-19. She now has only one dog left – Candy, also a dorgi.

“Her Majesty adores her dogs and it's always a blow, particularly now,” a palace insider says.

The queen has always been synonymous with corgis and in more recent years added dorgis to her menagerie of furry friends, which would often accompany her on her work duties. Her last remaining corgi, Willow, was put down in 2018 after suffering from cancer.

Prince Andrew once said his mother’s love of her dogs helped to keep her fit.

“She is just amazing at her age and she walks a long way,” he said. “The dogs keep her active.”

The death of Vulcan is bound to make the traditionally festive season even tougher for the queen. The queen - and her beloved dogs - meet players and officials from the New Zealand Rugby league team at Buckhingham Palace in 2007. (Photo: Gallo Images/Getty Images)

In fact, Her Majesty may be facing her loneliest Christmas ever as it appears she and husband Prince Philip will not be hosting their traditional extended-family Christmas gathering at Sandringham.

They will remain at Windsor Castle where they’ve been isolating with a “bubble” of staff for most of the year.

Current Covid-19 restrictions in the UK limit gatherings to three households (the so-called rule of three) and until recently it was thought she would still go to Sandringham with two other households – one of them belonging to her son Prince Edward and his family. However, that has now been scrapped.

Her eldest son, Prince Charles and his wife, the Duchess of Cornwall, will reportedly spend Christmas at Highgrove in Gloucestershire, while Prince William and Kate are likely to spend Christmas with her family at the Middleton home in Bucklebury, Berkshire.

Her second son, Prince Andrew, will be the closest one to her as he lives in the Royal Lodge in Windsor Great Park.

The queen is unlikely to get another dog. According to royal editor Rebecca English, she decided to stop breeding dogs as “she didn’t want to leave any behind when she dies”.

"It’s also been suggested she was reluctant to have a large pack of pets for fear of tripping over them." - Rebecca English

Vulcan and Candy are descendants of a line of dorgis that began when Princess Margaret’s beloved dachshund, Pipkin, was mated with one of the queen’s corgis.

We live in a world where facts and fiction get blurred
In times of uncertainty you need journalism you can trust. For 14 free days, you can have access to a world of in-depth analyses, investigative journalism, top opinions and a range of features. Journalism strengthens democracy. Invest in the future today. Thereafter you will be billed R75 per month. You can cancel anytime and if you cancel within 14 days you won't be billed.
Subscribe to News24
Related Links
Should the queen be first in line? Brits divided over the vaccine pecking order
Kate, William and the kids mourn the passing of their beloved family dog, Lupo
Next on You
Algorithm Queen: robot paints portrait of British monarch ahead of jubilee celebrations