Queen Elizabeth: The highs and lows of a long, memorable and well-lived life Queen Elizabeth II's unprecedented reign saw her having to deal with devastating lows and tremendous highs on a national, global and personal level. 21 October 1966: The disaster that struck the mining village of Aberfan in South Wales remains one of the United Kingdom’s greatest tragedies.  An avalanche of coal waste stacked on the mountainside started on to the town below, destroying everything in its path. A total of 116 children and 28 adults died in the catastrophe.

Queen Elizabeth refused to visit at first, triggering outrage in the press about her seeming reluctance to give solace to the grieving. “People will be looking after me, when perhaps survivors might have been found under the wreckage,” she is said to have reasoned.

Instead she sent Prince Philip, and what he saw moved him deeply. He encouraged her to see the scale of the disaster for herself and, eight days later, she set off for Aberfan.

“As a mother, I’m trying to understand what your feelings must be,” a clearly emotional queen said. “I’m sorry I can give you nothing at present except sympathy.” 20 July 1969: The first men on the Moon, astronauts Neil Armstrong and Buzz Aldrin, became global heroes, touring the world and attending a reception at Buckingham Palace. Armstrong developed a heavy cold and almost didn’t attend but felt it would be a poor show. And so he had his famously awkward encounter with the queen, coughing in her face as they chatted which prompted her to raise her hands in mock surrender. The queen on one of her first walkabouts, on a tour to New Zealand in 1970. (PHOTO: Gallo Images/ Getty Images)

The Down Under walkabout

March 1970: Before this tour, members of the royal family would drive by crowds of well-wishers in cars, waving regally out of windows. But that changed when the queen went on a tour of Australia and New Zealand and she bucked centuries of tradition to stroll along the streets to greet crowds of ecstatic onlookers in person. Michael Fagan broke into Buckingham Palace twice, and blamed it on the magic mushrooms he'd been taking at the time. (PHOTO: Gallo Images/ Getty Images)

Fagan, then 32, first broke into the palace in June and escaped undetected, and a little more than a month later he broke in again, and made his way to the queen’s bedroom, where he threw open the curtains, waking the monarch. The queen said to him, “What are you doing here?’” They had a short conversation before the queen left the room and called for help. An artist's rendering of Michael Fagan having a chat with the queen after breaking into Buckingham Palace. (PHOTO: Gallo Images/ Getty Images)

Poor security was blamed for the ease of his sneaky visits – the queen’s police bodyguard had gone off duty, an alarm Fagan had tripped was ignored and the queen’s attendants were walking her dogs when Fagan went into her bedroom. Fagan was charged with theft (for drinking Charles’ wine) but he was acquitted.

Decades later he blamed his royal visits on the magic mushrooms he’d been taking at the time. 21 December 1988: The terrorist bombing of American Pan Am Flight 103 en route from London to New York killed 259 passengers, including 190 Americans, and crew and 11 Scots on the ground after it exploded over the Scottish town of Lockerbie.

The queen decided not to visit the stricken town, concerned she would be a distraction to the recovery and investigation operations, and Prince Andrew was dispatched, where he declared the tragedy “was much worse for the Americans” and had been “only a matter of time” before a plane fell out of the sky.

Andrew’s utterances were met with shock and outrage and the queen was reportedly mortified.  Congressional address16 May 1991 The queen addressed a joint session of the US Congress, the first British monarch to do so. November 1995: Diana did not hold back in her BBC interview, talking about her depression, bulimia, adultery, her doubts about Charles’ ability to be king and his affair with Camilla. A month later the queen gave permission for Charles and Diana to divorce. 13 March 1996: The queen and Princess Anne visited the site of the worst mass shooting in British history, where a gunman killed 16 primary-school children and a teacher before taking his own life. “It was almost unbearable,” recalled a member of the queen’s team that day. “But you wouldn’t catch her portraying that in public. It was done behind closed doors.” 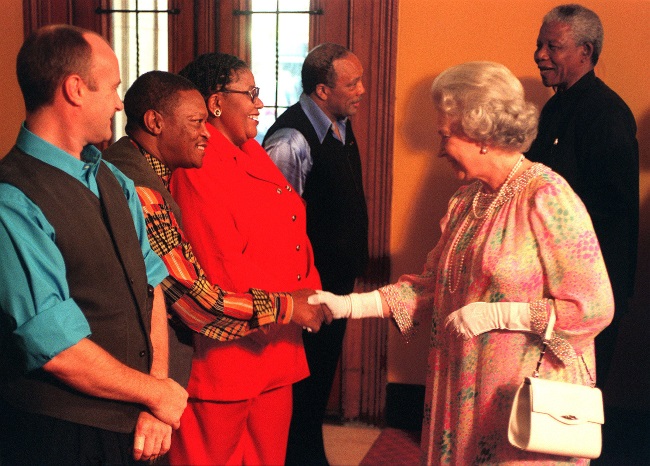 July 1996: On a visit to the UK, Nelson Mandela hosted the Two Nations concert at Royal Albert Hall, organised by Prince Charles. When Ladysmith Black Mambazo began performing, Madiba stood up in the royal box and started to dance. Prince Philip joined him; followed by Charles; and said Renwick, “to everyone’s surprise, the queen stood up and did a little side-by-side movement too”. As the Daily Telegraph noted the next day, Her Majesty “has seldom been known to boogie in public”. 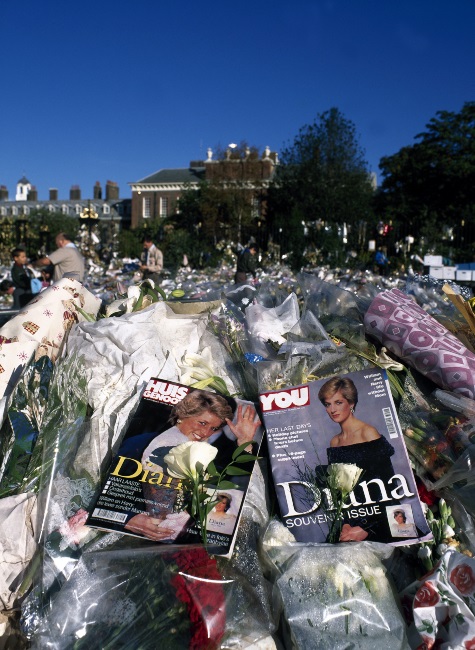 Masses of flowers were placed in front of and around Kensington Palace after the death of Princess Diana in 1997. (PHOTO: Gallo Images/ Getty Images)

31 August 1997: The world was in shock and disbelief when the princess died of injuries sustained in a car crash in Paris – along with her boyfriend, Dodi Fayed; and Henri Paul, their driver. The queen initially refused to allow the flag to fly at half-mast over Buckingham Palace or to address the grieving nation, and there was much public outrage. At the urging of her advisers, she revised her stance on the flag and delivered a rare, televised address. The queen and prince Philip enjoy a parade in The Mall as part of her golden jubilee celebrations in 2002. (PHOTO: Gallo Images/ Getty Images)

A time of sadness

2002: The queen celebrated her golden jubilee in 2002, but it was also the year she lost both her mother and sister within weeks of each other, in February and March. Despite her heartache, it was business as usual for the queen and she visited the Caribbean, Australia, New Zealand, Canada and 70 cities and towns in the UK. June 2012: Elizabeth celebrated 60 years on the throne, making her the only monarch since Queen Victoria to have a diamond jubilee. An heir is born 19 May 2018: Prince Harry and Meghan Markle’s wedding had the queen’s approval and was initially widely viewed as a sign of the changing monarchy, as the American actress was also a biracial divorcee. Sadly, the couple’s relationship with the royal family and the media quickly grew tense, and in a move dubbed “Megxit” they moved to the US in 2020 with their son, Archie, who was born in 2019. 2019: Andrew became mired in the Epstein paedophile scandal when Virginia Roberts Giuffre, who claimed she was one of the women ensnared in Epstein’s lair, came forward with damning allegations that  Epstein, who killed himself in New York jail cell, had forced her to have sex with the prince on three occasions, allegations that the prince has repeatedly denied. The queen and Prince Philip, photographed a few days ahead of his 99th birthday in 2020. (PHOTO: Gallo Images/ Getty Images)

20 November 2020: The queen and Philip celebrated their 73rd and last wedding anniversary together during the Covid-19 pandemic. The couple beamed as they opened a homemade card from their great-grandchildren, Prince George, Princess Charlotte and Prince Louis. 7 March 2021: The royal family were left reeling by Meghan and Harry’s tell-all interview which included accusations that a royal relative commented on the skin colour of Meghan’s unborn son and that The Firm would not help her when she felt suicidal.

The queen, in response, said “the whole family was saddened to learn the full extent of how challenging the last few years have been for Harry and Meghan. The issues raised, particularly that of race, are concerning. Loss of her strength and stay

9 April 2021: Prince Philip passed away after an extended stay in hospital just two months shy of living for a century. The queen and Philip’s relationship was probably best summed up once by Lord Martin Charteris, the queen’s former private secretary.

“Prince Philip is the only man in the world who treats the queen simply as another human being,” he said.

“He’s the only man who can. Strange as it may seem, I believe she values that.”

We live in a world where facts and fiction get blurred
In times of uncertainty you need journalism you can trust. For 14 free days, you can have access to a world of in-depth analyses, investigative journalism, top opinions and a range of features. Journalism strengthens democracy. Invest in the future today. Thereafter you will be billed R75 per month. You can cancel anytime and if you cancel within 14 days you won't be billed.
Subscribe to News24
Next on You
Who is 'Tall Paul'? Everything you need to know about the queen's loyal aide who was at her side right to the very end