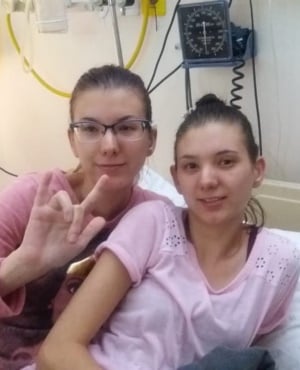 “It’s going well and I’m positive about their progress,” Gary Lewis, the twins’ dad told YOU.

“It’s a lengthy process. They won’t have 100% hearing within just one day but I’m excited about their progress.”

The twins were born deaf and got their first hearing aids at the age of two. But over recent years their hearing loss became too profound and they were found to be good candidates for cochlear implants.

Unfortunately because the implants involve such an expensive operation and medical aids don’t fully cover it, they haven’t been able to have the surgery before now.

“A hearing aid augments sound for someone who has a measure of hearing loss,” explains Erika Basson, manager of the Foundation for Children with Hearing Loss in Southern Africa.

“So it boils down to acoustic stimulation of the cochlear nerve. A cochlear implant becomes necessary when the hearing aid no longer works optimally because of damage to the hair cells.

“A cochlear implant refers to electronic hearing stimulation. The implanted electrodes in the inner ear bypass the damaged hair cells and stimulate the [acoustic] nerves directly – the brain receives the message of sound electronically,” Basson explains.

“We received a large sum of money from an anonymous donor and the medical aid also covered a portion of the operation,” says the twins’ mother, Brende Lewis.

Brende and Gary are divorced and Shanice lives with her mom in Cape Town, while Melissa lives with her boyfriend, Duane, and his parents in Swakopmund, Namibia. Duane is also deaf.

Shanice also has problems with her sight and because she relies on sign language to communicate, she stays at home.

“She has a tutor who helps her with speech therapy, spelling, reading, writing... all the necessary developmental exercises she has to do on a daily basis,” Basson says.

Melissa also uses sign language but is able to speak a few words.

“She speaks a few words every now and again and she recently started doing administrative work,” Basson says.

The twins are already progressing well, even though they’ve only had the implants for less than a month, says Dr Catherine van Dijk, head of the cochlear implantation division of the Ear Institute in Pretoria.

Melissa has already had her first programming at the Foundation for Children with Hearing Loss and Gary says she was feeling positive about the results.

“She indicated that there’s a lot of noise around and doctors adjusted the device, but she’s excited,” Dr Van Dijk says.

Melissa has also made it clear that she can definitely hear more than she could the week before, according to Basson.

Shanice has also been for her first programming in Bellville, Cape Town.