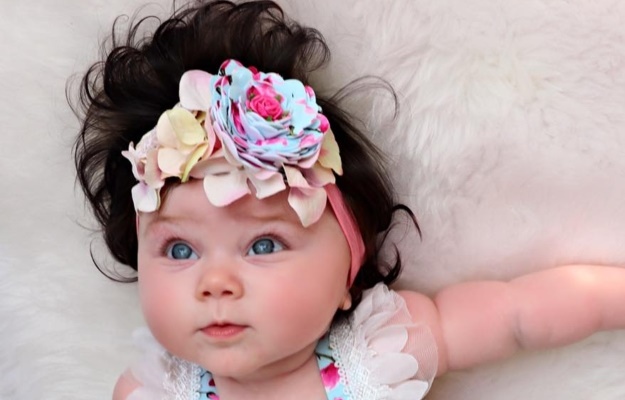 Primrose Autumn Loveridge’s rise to fame started when her mother, Beccy May Cooper (29) from Somerset in England, would go to the shops with her and everyone would notice the little girl’s long, thick black hair.

“She gets so much attention when we go out,” Beccy says. “If you just nip to the shop you end up being there for an hour because people just stop and start talking about it.

“They say they’ve never seen a baby with so much hair. Especially the older generation – they can’t believe it.”

The doting mom has no idea where her baby girl gets her hair from, Metro reports.

“We don’t know where she got it from because I had very little when I was younger and my fiancée already has a receding hairline.”

The baby girl’s favourite thing is a blow-dry, especially when her mom does it. She even holds her own brush occasionally, The Sun reports.

“When I brush it she has to hold her own brush in her hands,” Beccy says. “She’s such a character. She absolutely loves it, as soon as the hairdryer is switched on she starts bouncing up and down and giggling. It’s hilarious!”

Primrose is already being told she looks like Agnes from Despicable Me or a Cabbage Patch Doll, Mail Online reports.

“She’s so squeaky and excitable all the time,” Beccy says. “She’s such a happy, bubbly baby and she’s so talkative.”