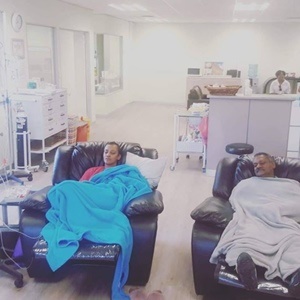 For three weeks he sat next to her every day to keep her company. “Sometimes I’d just sleep but he’d still stay with me,” says Odille Monk (28), a Pilates instructor from Paarl, near Cape Town.

Odille, who was diagnosed with a tumour in her chest last year, completed her chemo treatment last week.

“You mustn’t just tell your children you care, you must show them,” Peter tells YOU.

When Odille’s symptoms started, she put it down to a sinus problem. But when her coughing didn’t subside she finally went to see a doctor.

“For about three months I coughed and coughed. I didn’t feel well at all,” Odille says. She started wondering if she had tuberculosis and had herself tested for the disease.

“The tests showed a tumour in my chest, at the bottom, near my heart,” Odille says about her diagnosis in October last year.

“It was such a shock,” she says, adding that it took about a month for reality to set in.

Since her diagnosis, she’s received chemotherapy every three weeks, for about seven hours a session. Her hair fell out and after each session she’d feel exhausted, nauseous and lethargic.

“But it was wonderful having my dad there with me. He made me strong and it felt as if I had a little bit of home close by,” she says.

She’s still feeling exhausted after Wednesday’s final chemo session, Odille says. “The hardest is that I’m struggling to keep my eyes open. And my hair started falling out again. But I’m truly relieved that it was my last session.”

“It’s a miracle and of course a huge relief,” she says.

She didn’t let her treatment get in the way of marrying Scott Monk in December near Wellington. They became engaged in June last year.

In three weeks’ time she’ll go for a scan to see if the tumour has been destroyed. For the next few months she’ll also have regular check-ups and blood tests. “I’ll just have to live a healthy lifestyle,” she says.

Peter is positive about his daughter’s future.

“There’s nothing left [of the tumour], everything’s over. I’m positive,” he says, adding the past few months were hard.

“But the Lord gave us the strength to get through this. She was at death’s door but her faith gave us all strength,” says the former Bok coach, who’s deeply religious.

At one point, he shaved off his famous moustache in support of Odille’s struggle.

“Sometimes, I’d get a fright at the sight of myself in a mirror,” he laughs, before continuing on a more serious note.

“She came into my study and said, ‘Daddy, look at my hair.’ But I knew I couldn’t let myself cry in that moment – I needed to be strong. We have to show our children we’re there for them.”

Peter, who coaches Zimbabwe’s national rugby team and is a motivational speaker, describes the past three months as a “speed wobble”.

“I don’t even want to call it an illness. She’ll get back up to speed now,” he says about his daughter.

“I kept believing God was in charge and would heal me,” Odille agrees.

“It was also incredible to see how much the community supported me, how people brought food, baked bread and sent me messages of support,” she says, smiling.

We live in a world where facts and fiction get blurred
In times of uncertainty you need journalism you can trust. For 14 free days, you can have access to a world of in-depth analyses, investigative journalism, top opinions and a range of features. Journalism strengthens democracy. Invest in the future today. Thereafter you will be billed R75 per month. You can cancel anytime and if you cancel within 14 days you won't be billed.
Subscribe to News24
Related Links
Many breast cancer patients can skip chemo, big US study finds
Mother on ‘toxic’ chemo: ‘It’s the red devil’
Can sick kids benefit from dagga?
Next on You
You've been washing your hands wrong your whole life – here’s how to do it properly