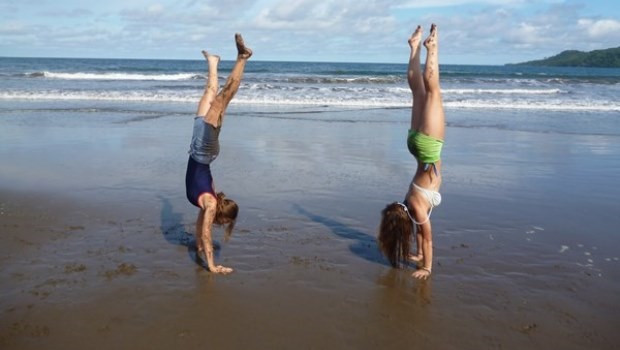 Rather than go at it alone, why not rope in a friend for your fitness journey. Here are five reasons having a gym buddy is better than getting sweaty all by yourself.

1. You'll actually make it to gym (or to the park)

When you have to drag yourself to the track for a run after a long day at work or get up at the crack of dawn to get to gym -- it is very easy to talk yourself out of it. Not so much when you need to meet your friend there.

"If you know a friend is waiting for you at the gym or won't pound the pavement without you, it's tough to bail," says Thomas Plante, professor of psychology at Santa Clara University in California.

So maybe your friends a little bit fitter than you are? Rather than letting that put you off working out with them – let it motivate you.

People who exercise with someone they thought was fitter or stronger than them worked out up to 200 percent harder and longer than others, found researchers from Kansas State University.

"If they're constantly working out with someone who's beating them, we wondered how motivated people would be to keep coming back and getting beat again," says Brandon Irwin of the university’s Department of Kinesiology. "It turned out to be exactly the opposite -- over time, it can be very motivating."

In a study of 117 adults, done by researchers from the University of Southern California, those who worked out with a friend (or spouse, or family member) said they enjoyed the exercise more than those who got sweaty by themselves.

It makes sense: if you like really like hanging out with your friend and you sort of like exercising - the entire exercise experience will be more enjoyable.

JOIN US FOR THE ULTIMATE WORKOUT PARTY!
If you want more on getting fit and shedding excess kilos in a healthy, sustainable way then join us for SA’s biggest fitness party on 29 Oct in CT. Get your ticket here.

It is common knowledge that exercise decreases stress, but working out with a buddy will decrease your stress levels even more.

According to a study published in the International Journal of Stress Management People who exercised on a stationary bicycle for 30 minutes with a friend said they felt calmer after the workout than those who cycled by themselves.

And workout buddies don’t necessarily have to chat during the work out, the research shows that even just cycling or running (or lifting weights) alongside each other in silence will do the trick.

If you’ve stalked around the weights section too scared to touch anything or longingly stared at a yoga class too terrified to join – you need a gym buddy.

When you’ve got someone else with you it’s much less intimidating to start using the gym - joining new classes, hitting the weights or trying out new exercise equipment.

Perhaps your buddy has taken an amazing tai’chi class or mastered a kettlebell workout - either way, you'll walk away with a refreshed routine and will eventually achieve a better and more balanced body.

We live in a world where facts and fiction get blurred
In times of uncertainty you need journalism you can trust. For 14 free days, you can have access to a world of in-depth analyses, investigative journalism, top opinions and a range of features. Journalism strengthens democracy. Invest in the future today. Thereafter you will be billed R75 per month. You can cancel anytime and if you cancel within 14 days you won't be billed.
Subscribe to News24
Next on You
Here’s why you might want to work out in the cold