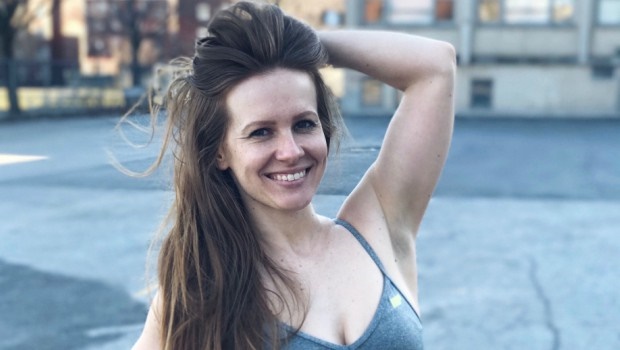 This mom-to-be was able to beat her eating disorder with the help of the love of her life.

Brenda Raftlova, from Montreal in Canada, has overcome the eating disorder that left her regularly purging the contents of her stomach, controlled her food habits for eight year and saw her weighing less than 44kg.

In a side-by-side image recently shared by the marketing and PR specialist, it shows the stark difference in Brenda’s appearance from when she was bulimic, to when she became orthorexic (a disorder characterised by a morbid obsession with eating healthily), to now being healthy.

Brenda revealed that she never truly felt happy with how she looked because she hated her appearance.

“I was very unhappy with myself and my body and I thought that thinness would fill my soul,” says Brenda, who became bulimic at age 16.

“The hardest part was that no one knew about it. I was suffering alone and in silence.

She says purging became instinctive as she believed that being skinnier would make her happier, without changing her calorie intake – even though her lifestyle led to further weight gain.

“I was so desperate to lose weight, but I loved food too much and wasn’t willing to reduce my intake, so I decided to purge.

“I would run 10km every day and only eat very specific food. It took me a year before I found the right balance,” she says.

Brenda revealed that her recovery wasn’t easy. When she first stopped purging at the age of 24 she was still unhappy with how she looked, which led her to obsess over working out.

“My diet and exercise regime before I started my recovery journey was extremely obsessive and unhealthy. I would work out for hours on a daily basis and eat very small portions,” she says.

But her breakthrough came when she met her now-husband, a former professional hockey player and coach, who helped her get back on track.

“The minute we started dating I knew I was going to marry him one day and have kids with him,” says the now 30-year-old.

“But I knew that if I wanted to be a mom I would need to stop leading this crazy, unhealthy lifestyle. And that was my wake-up call.

“I am now a totally different person,” she says.

The brunette beauty now works out four to five times a week and reveals that her family is extremely proud of her healthy lifestyle.

“I work out four to five times a week for about an hour and I do it because I absolutely love it.

“My family are very proud and very happy that I’m finally living a healthy and cheerful life.

“In terms of food? I have the biggest appetite. I eat five to six meals a day. I make sure I fuel my body with nutrient-dense food, but I also like to listen to my body and give it whatever it craves.

“In other words I live a balanced life,” she says.

Brenda and her husband have been weightlifting together since 2013, and are expecting their first child later this year.

“Since finding out about my pregnancy I actually haven’t missed a workout,” Brenda says.

“I feel great and I feel strong. I’m very lucky.”