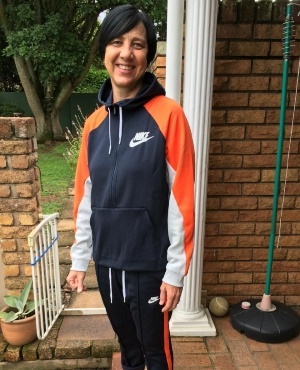 Hayley Herman some time after the transplant. Photo. (Supplied)

A 45-year-old woman from Pietermaritzburg got a kidney transplant in June 2018 after nearly six years of suffering with renal problems.

Former tennis coach, Hayley Herman discovered she had kidney problems in 2012 after going for X-rays and blood tests for a shoulder injury – with the tests picking up she had renal failure and high levels of creatinine in her body which signifies impaired kidney function.

After initially being misdiagnosed by a specialist in Howick, she had an allergic reaction to Vancomycin, an antibiotic prescribed to patients with acute renal failure.

“I had a severe skin reaction,” she said.

“It was a rare allergy known as red man syndrome where my skin was red and inflamed which caused my whole body to swell, I lost a lot of hair as well.”

It was only in 2013 after she saw another specialist named Dr Siddique that she received the correct medical treatment for her condition.

“Dr Siddique was the nephrology specialist who changed all my medication and placed me on haemodialysis (a process of purifying the blood),”

Hayley has always been a sportswoman and took part in satellite tennis tournaments in South Africa. She also did mountain bike racing for about two years.

“I played professional tennis for 14 years and competed in tournaments in Gauteng, the Western Cape and KwaZulu-Natal before taking part in mountain bike racing from 2009 to 2010,” she said.

The dialysis cost R1 800 for each four-hour session, with the process leaving her feeling drained and exhausted. “I had dialysis three times a week. It was really painful, especially the two needles that are placed in your arm for the sessions.

“[Patients on dialysis] are also restricted to 500ml of liquid a day.”

“It was very hard on my parents as they felt so helpless. It was a difficult time as my family didn’t support me except for my Mom and Dad,” she said.

She was put on the donor list in October 2017 and found it really hard to get a match because there were only a few available donors.

“I was totally isolation at home for three months after my transplant on 2 June. I’m still in slight isolation, having to wear a mask when in public places because I’m always susceptible to infections.” After her ordeal and life-saving transplant, she wants to encourage others to become donors.

“[Organ] donors are so important they can save up to nine people’s lives,”

We live in a world where facts and fiction get blurred
In times of uncertainty you need journalism you can trust. For only R75 per month, you have access to a world of in-depth analyses, investigative journalism, top opinions and a range of features. Journalism strengthens democracy. Invest in the future today.
Subscribe to News24
Related Links
Coffee may have another perk for kidney patients
‘I’m not sure how many kidneys I’ve had inside me’- frequent kidney transplant patient shares...
One reason why kidney transplants fail
Next on You
Now's the time to get your feet in tip top condition – here's how to do it at home