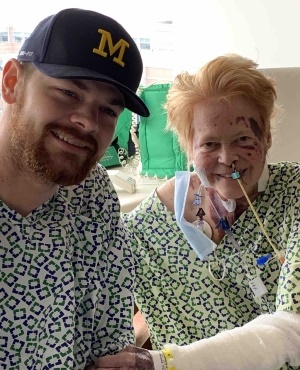 An American man has given his girlfriend’s grandmother a new lease of life.

Last month, Cody Corwin (26) from Michigan in the US decided to donate part of his liver to Bernice Ramsey who was diagnosed with a form of liver disease five years ago, People reports.

“I’m speechless! For him to step up and do something for someone I love so much . . . I just love him so much more for it,” Cody’s girlfriend and Bernice’s granddaughter, Shelby Platt (26), said in a recent interview.

“When she got sick I selfishly kept thinking about her missing my wedding. Cody saved her life and I’m forever thankful.”

The grandmother of four has steatohepatitis – a nonalcoholic fatty liver disease, according to the MSD Manual.

Bernice needed a liver transplant but none of her family members was a match.

On discovering that the 71-year-old needed the urgent transplant, Cody, who’s been dating Shelby for three years, didn’t think twice about getting himself tested to see if he’s a match, Good Morning America reports.

“She got really sick and she’s always been one of the sweetest ladies I’ve ever met,” Cody told the morning talk show. “When I found out no [family member] was a match I called the Cleveland Clinic and found out I was. I felt like it’s something I had to do for her.”

The surgery took place on 25 February at the Cleveland Clinic in Ohio and Bernice’s liver is now fully functioning. Cody, who hopes to go back to work soon, is recovering well, ABC News reports.

“How do you thank somebody?” Shelby’s mom, Heather, asked. “For Cody, he had so much to lose. There’s a lot that can go wrong. There’re no guarantees and for him to be so selfless and say, ‘I’ll do this for you’, it just means the world to us.”

We live in a world where facts and fiction get blurred
In times of uncertainty you need journalism you can trust. For 14 free days, you can have access to a world of in-depth analyses, investigative journalism, top opinions and a range of features. Journalism strengthens democracy. Invest in the future today. Thereafter you will be billed R75 per month. You can cancel anytime and if you cancel within 14 days you won't be billed.
Subscribe to News24
Related Links
5 liver cleanse myths busted
Liver transplants tied to alcohol use in the US doubled since 2002
Does aspirin help prevent liver cancer?
Next on You
You've been washing your hands wrong your whole life – here’s how to do it properly

Read more on:
manlivertransplant
LATEST YOU