Meet the woman who hasn’t eaten for over four years A 21-year-old woman from Netherlands hasn’t eaten in more than four years because of a rare disease.

Her intestines and stomach aren’t working because of the disease, which she contracted after complications that arose because of being born breech.

The woman has since been given an IV-line into one of her arteries, so she can receive the vital nutrients needed to survive.

Kelly also has two ostomy bags to collect her faeces, as well as a line running from her, which used to discharge her bile.

She hasn’t eaten in four-and-a-half years and says she doesn’t miss it and only longs for the social aspect around eating.

"Think of it: what will you do if you want to meet with your friends for a fun day? Everything revolves around food. I can't partake in that, so often I sit there rather uncomfortable with a cup of light broth just for the form," she says.

Despite the serious – and potentially fatal – disease, Kelly remains positive and came forward with her story on World Ostomy Day which was observed Saturday 6 October to speak more about her disease and encourage others suffering from it.

"I'm living life to the fullest and I try to get everything out of it," she said.

Because of the IV-line into her artery, Kelly runs the risks of infections which would cause blood poisoning.

"I had this so many times before, with even antibiotics not working. If I get sick again now, the chance is high that I’ll die.

"In November I was on the edge of death. An infection started in my IV-line which stops 3cm away from my heart. My parents then even said their farewells to me because it looked like I’d die. The line was then removed, which was my luck," she added.

Kelly said she’s not ashamed of her body despite the many lines and ostomy bags.

"I hope the taboo around ostomy bags gets less and people dare to ask questions to me instead of just staring."

Even though she’s unable to work because of her disease, Kelly is giving classes about her disease at schools and volunteers at the local sports club. 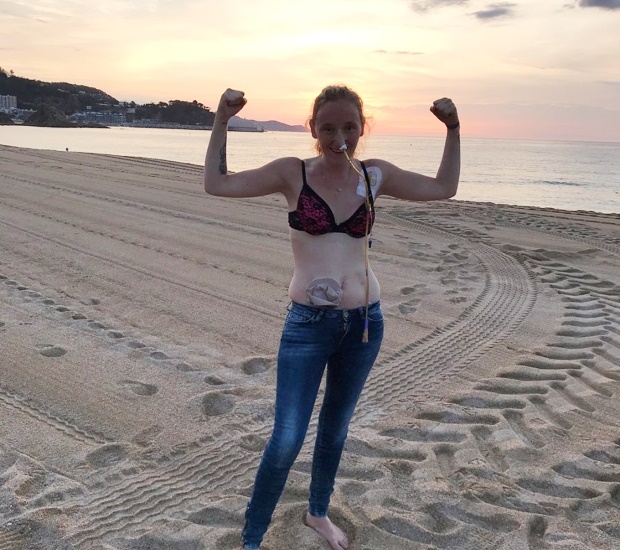 Kelly lives on her own with her support dog Lyfke.

"Because of Lyfke I got a big part of my independence back,” she said.

We live in a world where facts and fiction get blurred
In times of uncertainty you need journalism you can trust. For only R75 per month, you have access to a world of in-depth analyses, investigative journalism, top opinions and a range of features. Journalism strengthens democracy. Invest in the future today.
Subscribe to News24
Next on You
Here's how to improve your mental fitness