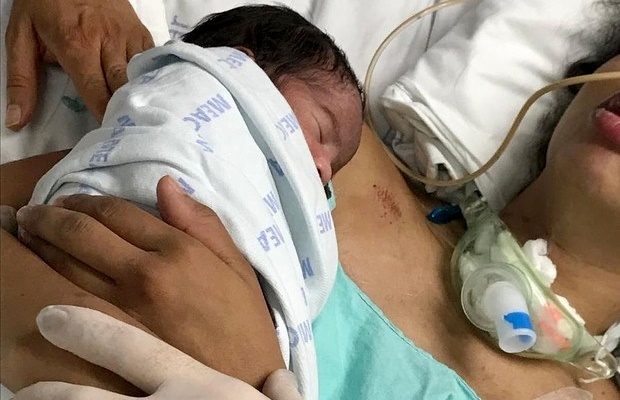 A mom has left doctors stunned by waking up from a 23-day coma the moment her newborn son was placed in her arms!

Her reaction was even more incredible because the 28-year-old, who suffers from epilepsy, had no memory of giving birth.

Mom-of-three and housewife Amanda da Silva was 37 weeks pregnant when she was rushed to hospital after suffering from an acute seizure.

She says it was triggered by an argument with her husband.

The convulsions threatened her life and the child’s survival as they lowered oxygen flow to the brain and the womb.

Doctors at Ceara Assis Chateaubriand Maternity Hospital (MEAC) in Fortaleza, Brazil, put her under sedation and performed an emergency Caesarean.

Complications started almost immediately after the C-section and physicians were forced to take emergency action, placing Amanda in a medically induced coma.

Victor, weighing 2,1kg at birth, had a weak immune system and respiratory problems due to his mother taking epilepsy medication during the pregnancy.

Victor was sent straight to neonatal care without any maternal contact, where he stayed for six days before going to a semi-intensive care unit.

Amanda was transferred to intensive care where she remained in a deep coma.

The young mom opened her eyes after doctors brought her out of her coma but she failed to react to any commands when doctors tried to speak to her.

“Just over a week after she was admitted to hospital we began removing the sedatives that kept her asleep, but she didn’t respond as we expected,” said Obstetrician Carlos Alencar.

“Although all the exams testified that she had a good neurological response, she didn’t move.

“We applied pain stimuli, but she didn’t react. The exams showed brain activity, but the areas of activity weren’t responding to anything specific, not even to the voices of relatives.

“She didn’t move her arms, legs or anything.”

The medical team said they were running out of ideas and were on the verge of sending her to another health facility for long-term remedial care, when ICU nurse Fabíola Sá suggested putting mother and son together.

At first they were concerned about the health risks involved with bringing little Victor into an adult ICU, but after consulting a microbiologist, they decided it wouldn’t harm the baby.

Recalling the moment – which took place in March but has only recently been revealed – nurse Fabíola said Amanda was motionless and couldn’t even hold her son when he was brought to her bed. So Fabíola took the mother’s arms and wrapped them around her son, helping her to cradle him on her chest.

To everyone’s surprise, the moment the baby was placed skin to skin, the patient’s heart rate quickened, and she started crying and producing milk.

“Her response was immediate. After 23 days in a coma her reaction was inexplicable,” said Fabíola.

“We never expected such a quick change and everyone in the medical team wept with happiness and relief.”

Doctors couldn’t let Amanda nurse her baby because of the medications she was on.

Even so Victor, who is now eight months old, kept opening his mouth and licking his lips in anticipation.

The improvements continued and slowly Amanda began to respond, moving her limbs and sitting up in bed.

She says she was also shocked to see Victor when she woke.

“The first thing I remember was having Victor in my arms, seeing his little head and smelling his lovely scent.”

“It was an amazing situation but at the same time confusing. I asked my dad if the baby was mine. I put my hand on my belly and realised I was no longer pregnant.”

Amanda, who has two older children aged four and two, has suffered from chronic epilepsy and has been on strong medications to control the illness since the age of seven.

When she discovered the third pregnancy, which she said was unplanned, she was instructed by doctors to stop using one of her prescribed medications because of the risk of foetal abnormality.

Using only one drug meant she suffered more seizures during pregnancy than on previous occasions.

Amanda and Victor were discharged from hospital 20 days after their special moment.

The unusual case is being studied by medical professionals to assess the importance of this type of intervention when a post-natal woman is in a serious medical state.

“We don’t have a scientific answer to what happened but it’s evident we should never underestimate the importance of skin-to-skin contact between mother and child,” said Fabíola.