A woman who was left paralysed from her breast-line down by a terrifying neurological disorder remains hopeful of a cure.

Mom-of-one Anita Brewer (31), a service agent from Atlanta, Georgia in the US, was 18 weeks pregnant with now 10-month-old son Van in June 2017 when she started experiencing back pain and numbness in her feet and legs.

Doctors said her symptoms were a result of her unborn baby causing pressure in her body and gave the soon-to-be-mom painkillers.

Within a week Anita’s symptoms worsened to the point where she struggled to walk, couldn’t urinate and experienced “unbearable” pain and numbness.

Her husband, Grant, rushed her to hospital where she was diagnosed with transverse myelitis (TM). This rare neurological condition affects the central nervous system and causes inflammation of the spinal cord. Anita was hospitalised for three weeks as doctors tried every treatment available, but to no avail.

Over the past year Anita has had lots of physical therapy and botox injections to deal with the nerve pain but the only treatment that would help her walk again is stem-cell therapy, which doctors hope would help rebuild her spinal cord. Grant’s started a Go Fund Me page to raise funds for the expensive procedure.

Anita says she noticed back pain and a little numbness in her lower extremities about a week prior to giving birth. 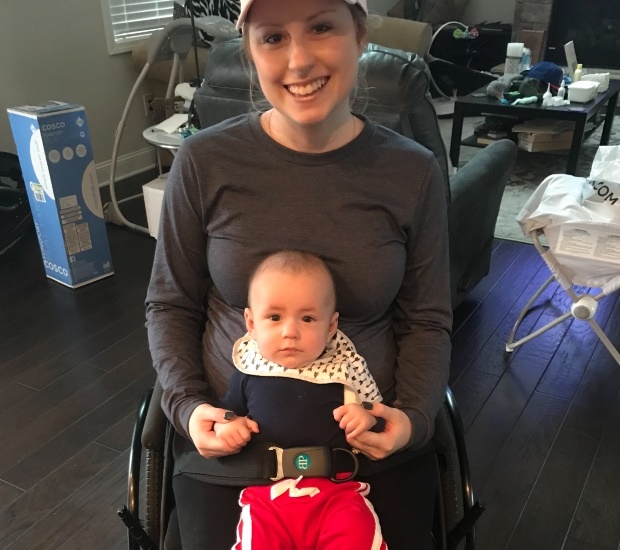 “We all thought that is was due to the baby causing some pressure,” saysd Anita, who hasn’t been able to walk since 14 June. “We even went to our family doctor to get her opinion and got prescribed pain medication.

“The night before we went to the emergency room the pain was excruciating and the numbness was getting even more pronounced. It got to the point where I was unable to urinate. That’s when we knew something definitely wasn’t right.”

Anita says her father and husband have to do pretty much everything around the house.

“We’ve all gone through depression and I have to take medication to alleviate my mind from anxiety,” she says. “It’s a very difficult process.”

Anita and Grant try to remain positive and hope they can inspire others living with similar conditions.

Describing the rehabilitation process she’s been through Anita says, “I spent seven weeks at Shepherd Centre, a world-renowned spinal cord rehabilitation hospital in Atlanta, Georgia. There I did in-patient rehabilitation, physical therapy, occupation therapy, mental therapy and many more treatments.

“I’ve been to the Kennedy Krieger Centre in Baltimore, Maryland, for two weeks to do even more advanced physical therapy with robotic technology such as the exoskeleton. This allowed me to walk with the help of a machine. It really brought tears of happiness for a moment being able to stand and to walk for a short while.”

Anita says the most difficult thing has been having to depend on other people.

“I’ve always been that person who helps others and it pains me that I have to be a burden at times to the people I love the most.

“It took us seven months to figure out that it was a vascular-related form of TM and not what you see on the internet, where it says most cases are auto-immune or vaccine-related.”

Anita advises other people going through similar turmoil to keep their heads up.

“Keep a great support group and stay strong. It’s not easy in the beginning; there will be time of grieving but never give up and always try to stay positive. Even if you never walk again, try to inspire as many people as you can along the way.”