An eight-year-old girl has undergone specialist training to care for her best friend with a disability and the pair – who were both born premature – are now inseparable.

The two British girls, who were both born at 25 weeks, forged a special connection after Christy (8) was able to communicate with her friend Ami-Grace (10) through sign language. They were both taught sign language by their parents when they were babies as their parents feared their premature birth meant they would be deaf.

Now their special skill has helped them to forge an amazing friendship.

Before meeting Christy two years ago, Ami-Grace struggled to make friends as she couldn’t communicate due to a range of complex medical conditions. But Christy, who’d learnt sign language at an early age, has since gone on to become PEG trained.

PEG stands for percutaneous endoscopic gastrostomy, a procedure in which a flexible feeding tube is placed through the abdominal wall and into the stomach. Now Christy is able to feed Ami-Grace. She’s also epilepsy aware.

The two girls, from Wakefield, West Yorkshire, are rarely seen without one another. Ami-Grace has a range of health and developmental issues, from epilepsy to muscle weakness.

Ami-Grace’s mom, Grace King (33), and Christy’s mom, Alee Bampton (25), who met through mutual friends, are documenting their daughters’ adventures on their blog.

“Both of our girls were born prematurely, so I thought it would be a good idea for my daughter Christy to make friends with Ami-Grace.

“After spending some time together, we saw that they had built up a really strong friendship. I know Ami-Grace really struggles to make friends due to her disability, but she’s so comfortable with Christy,” Alee says.

“I really believe spending time with Christy makes her happy, and they both have a special little connection.

“They do everything together, from shopping and going on tractor rides to playing dress-up. Watching them together melts our hearts. They’re inseparable and if Christy isn’t with Ami-Grace, she’s asking where she is,” she adds.

Alee says she made sure that Christy was taught sign language from when she was 18 months old, as doctors weren’t sure how she would develop. 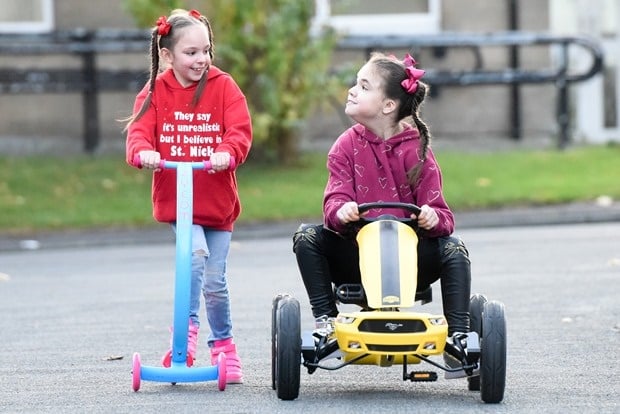 Now Christy does a lot for her best friend. “Christy has even said that when she grows up that she wants to be Ami-Grace’s personal assistant.”

The moms decided to start the blog The Adventures of Kid and Cub after witnessing the adorable ways their girls communicated with one another.

Ami-Grace is unable to talk but communicates through Christy by using sign language.

Grace, Ami-Grace’s mom, says it’s adorable to see two young kids who have been through so much put their differences aside to form a wonderful friendship with one another.

“We hope it will inspire others to not treat people with disabilities differently. They’re the same as you and me and everyone needs a best friend in their life to perk them up,” Grace says.

Even though the girls were born with only 30g weight difference between them, their health differs greatly.

Ami-Grace has a range of disabilities, including Branchio-oto-renal syndrome, a rare genetic disorder that affects the kidneys, ears, and neck and can result in deafness.

Grace was told Ami-Grace had just a 10% chance of survival and 10 years on, she’s still fighting the battle. “She learnt to walk aged seven and can now take steps independently with constant supervision but she needs help with every aspect of her life, and I do everything for her.

“Christy loves to help Ami-Grace in any way she can. Ami-Grace is visually impaired so she can’t see anything further than a meter in detail, so Christy will happily bring things closer.

“Ami-Grace can’t hear properly, so Christy will turn the volume up, and she even uses sign language to communicate with her.

“It sounds bleak but in reality Ami-Grace is very happy and she’s an amazing little girl, whose life has been enriched by her best friend,” Grace says. Christy has no preemie-related disabilities but loves spending all her time with Ami-Grace. When they’re not at their separate schools, the girls are often spending their time with one another.

Alee says when Christy was born it was touch and go, but thankfully she’s grown to be a healthy and happy young girl. “I’m so proud of my little girl – she’s PEG trained and epilepsy aware at the age of eight, which is such an achievement.

“I hope that both of the girls go on to have happy and fulfilled lives, and continue to show people that the only disability that limits you is ignorance.”