Transgender man opens up about his transition to being male 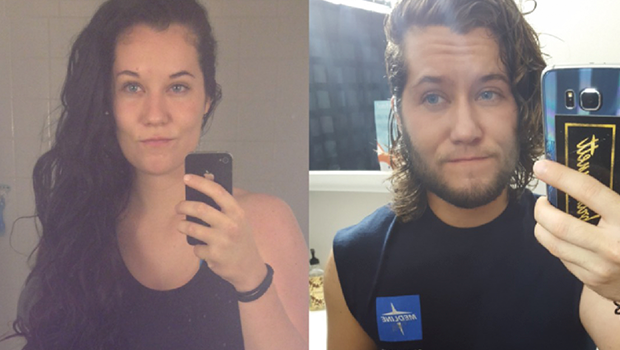 For him this was finally transitioning from female to male.

The 26-year-old from Wisconsin in the US was bullied in school for looking like what his tormentors described as a “dyke” before undergoing a makeover to stop it.

The Amazon Warehouse Associate knew in high school that he was going to transition but decided to be the best female version of himself until then.

“Before I started high school I used to get bullied as I wasn’t the most feminine girl. Around 2009, the year I graduated, I came out to a dear friend about being transgender.

“My path to starting my transition was a long one,” he explained.

He began work as a promotional model in the gaming industry and experienced some happiness with the feminine side of him, but realised it couldn’t last.

“I knew I’ve always felt different and that my sexuality didn’t exactly pinpoint it. My friend was the only person I told of my plans to transition in a few years.

“I figured if I was going to identify as female until then, I was going to be the best woman I could be. So after I graduated from high school I came out publicly as a lesbian.

“I pushed my comfort in femininity. I started promotional modelling for the gaming industry. I fell for the acceptance and positive attention I received for being the ‘femme lesbian’”

He added that she thought he was happy because she was getting to travel, got paid to look pretty at events and received positive attention.

“It was temporary happiness,” he said.

Barnaby – who used to be known as Emily Jean Royce – knew he wasn’t happy as a woman, but it wasn’t until his brother’s suicide and his subsequent travels that he really found himself.

“I was rushed home where I stayed for a week for the funeral with my family,” he recalled.

“A few months after I found myself living at a yoga retreat campground. I lived in a yurt on the grounds out of a gym bag for a few months. I sometimes spent weeks at a time on the campgrounds completely alone.

“I really started to learn more about myself. Toward the end of autumn I met two beautiful humans that invited me on a month-long road trip from Illinois to Oregon.

“After returning to Illinois, I had a completely different mindset. Through all the struggles and the joy I truly started to find my happiness,” he said.

After living out of his gym bag for half a year, his feminine appearance became less important to him. He said he realised how unhappy he was trying to be something he wasn’t.

“I only did it for everyone else and the positive attention I received. My brother also lived to make other people happy.

“He did everything he could to live that ‘American Dream’ life. He was also bullied in school until he changed his life to please everyone else.

“I promised myself that my happiness came first and that I would no longer live to make anyone else happy,” he explained.

Barnaby made the first change at 24 by cutting all his hair off and then started hormone treatments. He has since had three hours of top surgery (sex reassignment breast surgery) and plans to have a hysterectomy next.

He now lives with his girlfriend, Jacqueline Farruggia, in Grayslake, Illinois, He explained how the transition changed his life.

"Before my top surgery I had a very hard time with my dysphonia,” he said.

“Before surgery I was between a B and a C cup. I wore a binder for two years and I couldn’t wear tank tops because even with a binder I had visible cleavage.

“I would overheat in the summers and at work in warehouses. Now I find great joy in just feeling the breeze flow through my shirts. The surgery was life-changing and incredibly freeing.

“It has changed my life in many ways: how I view myself and how others view me; my jobs and interactions with men and women; my relationships with friends and family; my interactions in bars and within the LGBTQ community.

“I’m now viewed as a cis-male. I make more money than when I was female. I notice women avoid me on the street at night. Men use locker room talk around me.

“I feel happy now. I’m feeling more and more at home in my body. I no longer feel uncomfortable with the gender I present. It feels like this is who I have been all my life and people are finally seeing me for who I really am. I’m much more confident now.”

Barnaby’s entire family accept him for who he is and use his correct name and the correct gender pronouns. He had a message for anyone on the same path as he was.

“Trust the process,” he said. “Be patient. Love yourself. Stay strong. It gets better. I’m amazed by the changes I continue to see as more time passes.

“Don’t let anyone define your happiness. Find your community that makes you feel at home; it makes a world of difference. Transitioning can be hard, but not living as your true self can be so much harder.

“Reach out to your community. My fellow Trans brothers are my extended family. It’s so great getting to relate to someone when the process can make you feel so alone.

“Be proud of who you are and are becoming. I personally find my former self to be one of my inspirations and idols. She worked hard, overcame a lot and found the courage to let herself go to give me life. I couldn’t have made it this far with without her.”

Read more on:
transgender
LATEST YOU