"I'm sure we have PTSD": Parents of two-year-old girl that survived ovarian cancer make her smile every day 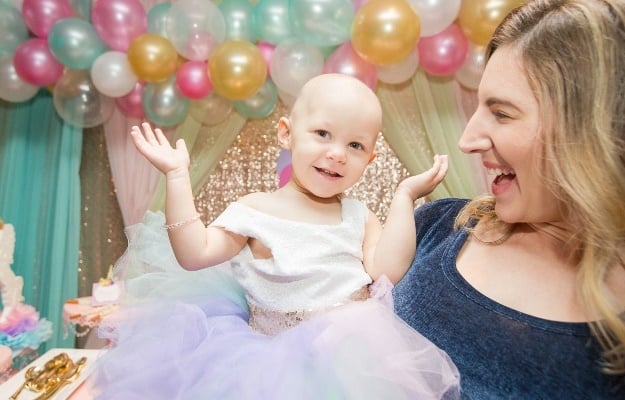 This brave two-year-old girl has had to fight for her life and has been undergoing aggressive chemotherapy after being diagnosed with ovarian cancer.

Stay-at-home mom and housewife Bianca Langtree from California, US, and her British husband Mark were given devastating news that their daughter Harlow – who was just 15 months old – had ovarian cancer.

This is a cancer of the ovaries which mainly affects women who’ve been through menopause, usually over the age of 50.

Before Harlow’s diagnosis, Bianca (27) and Mark (32) noticed something wasn’t right with her health: her appetite had decreased, she threw up often, she was more clingy than usual and wanted to be held a lot.

“We first started noticing things weren’t right in April of 2016. Harlow was 15 months old, and I was 25. Harlow wasn’t being herself and was very clingy,” Bianca said.

Initially they believed she’d caught a bug or ear infection, but when the doctors referred her to the Children’s Hospital of Orange County (CHOC), they had a feeling something was very wrong.

Bianca was four months pregnant with their youngest daughter, Sienna (now 11 months old), when Harlow was diagnosed with ovarian cancer.

“We were sent to CHOC and they showed us an X-ray of a tumour. We were in shock, total and complete shock,” Bianca said.

“The X-ray showed a tumour in her tiny body. I wanted to throw up. It felt like someone was punching me in the stomach continuously until I couldn’t breathe any longer.”

Harlow had to undergo major surgery to remove the tumour, which had also taken over her left ovary. They had to take preventative measures – including removing her appendix.

“Hearing a doctor tell you your child has a 50/50 chance of surviving and would undergo intense chemotherapy was scary,” Bianca said.

How Bianca and Mark coped

She and Mark decided to wait until Harlow had completed her first round of chemotherapy before they broke the news to people outside their immediate family.

“We actually waited until after Harlow’s first round of chemo to release the news to other family and friends. Once the initial shock was over, it was easier to answer questions we knew would be asked. We lost a lot of friends on the journey. People don’t know what to say or do, so they say nothing. It’s very isolating,” Bianca added.

Harlow’s fight against cancer is paying off and she’s now a smiley two-year-old girl, while her loving parents are making an effort to make every day special for the family.

“We stayed strong for the first eight-day hospitalisation while Harlow underwent major surgery to remove her tumour,” Bianca said.

Harlow also had two other procedures, to put peripherally inserted central catheter (PICC) lines into her arm for ease of access to medications.

“I think the first time I cried was after we left Harlow in the operating room to have her tumour removed. I’d been holding my emotions back for so long in fear of scaring her,” Bianca said.

“Each time a nurse got close to her she’d cry. Mark and I shared our first cry the night we came home after her surgery. Harlow had just been put in her crib.

“We cried watching her on the video monitor in her room. I remember us saying, ‘How can a baby so precious be so sick?’ ‘This is so unfair’ and ‘I wish it was me and not her’.”

Despite their shock and worry, Bianca and Mark decided they should document every happy moment Harlow had and shared pictures on social media.

“We wanted to share her highs and lows with anyone that wanted to follow her journey. It actually became therapeutic making her Harlow the Brave page. It was a much needed distraction while everything was going on around us,” Bianca said.

“I have my good days and bad days. The best days are the ones I don’t even think about the past and can just focus on the present.

“We don’t know what’s in store for us or for Harlow. Her cancer is very, very aggressive and has a high possibility of relapse.

“That’s why they did a stem-cell transplant and wiped out her entire body basically to give her an ultimately new life with new healthy cells.

“I’m sure my husband and I suffer from some form of post-traumatic stress disorder, but all parents of children with cancer I’ve spoken to feel the same way.

“Now that Harlow’s blood counts are normal, we can do things that make her happy. She loves to ride the carousel at the local zoo or go for walks to the park.

“She loves dancing and singing. Every afternoon before dinner we have a dance party in our living room. It’s the simple things that we missed the most during her treatment. So we try to do something to make her smile every day.”

Their tough journey has meant that they’ve lost friends along the way, partly due to a few hurtful comments they received.

“A close friend of mine at the time – she’s not any more because of her comment – texted me and asked, ‘Is she going to make it?’ What kind of friend even questions that? It was horrible and it hurt,” Bianca said.

“When Harlow had just finished treatment and had no hair, we often got people saying, ‘You have such a cute boy’ or ‘Look how cute he is’.

“I know they weren’t being mean in any way, but it’s just sad she doesn’t have long hair like a normal two-year-old should.

“You could tell it made them uncomfortable and we often found people couldn’t turn away or would avoid looking in our direction when out in public. Thankfully Harlow was too young to notice any of this.

“Harlow still has a long road ahead of her. She’s only in her first year of remission. So she still has clinic visits every six to eight weeks for blood draws to check her tumour markers. It’s a way to track if there are cancer cells in her.

“Never lose hope. Never ever give up. As a parent, you have to stay strong for your child but it’s also okay to cry from time to time.

“Even when you’re in the thick of it all, remember how brave and strong your child is. You must fight for them just as they’re fighting for themselves. Be their advocate. Be their strength. Show them more love than you knew was humanly possible. Never lose sight of the ones you love and get help if it’s available,” Bianca said.