Alysha McEntire has fatal allergy to the cold. (Image: Caters/www.magazinefeatures.co.za)

A woman from Cleveland in Oklahoma, US, has spoken out after people thought that her potentially fatal allergy to cold weather was a joke.

Alysha McEntire (26) suffers from cold-induced urticaria – a reaction causing histamine and other chemicals to be released into the bloodstream – which makes her body erupt in hives.

She initially believed the itchy blotches were caused by black elderberry tablets, but after quitting them her symptoms only intensified.

She realised that the spots occurred when she’d been exposed to cold.

Anything from being outside to sitting on a cold floor and even rain can cause a reaction for Alysha, and it could turn deadly if she goes into anaphylactic shock.

Alysha says people don’t believe her allergy is real and have often dismissed it as “bed bugs” or “dry skin”.

“I mostly get reactions of people being shocked to know that being allergic to the cold is a real thing. Most people think I’m joking,” she said.

Alysha, who works as a nurse aid, is forced to wrap up in numerous layers to avoid her skin ever becoming exposed to the cold.

“I have noticed if I get into my car when it’s not warmed-up, my ankles will get hives or if I have holes in my jeans they’ll appear there too,” she added.

“It can take five to 10 minutes for a reaction to happen, my allergist advised that I avoid the cold as any allergy can lead to anaphylactic shock.” 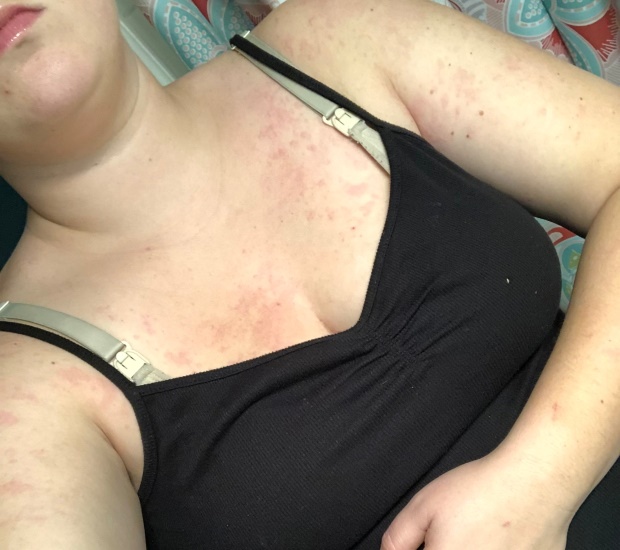 The mom-of-three says it gets frustrating during winter when she can’t play outside in the snow with her children.

“The biggest I would say were around the size of a quarter, but they all welt on top of each other – so I’m getting hives on top of hives.

“When I stopped taking the meds, I started getting them all over again.

Alysha has to take three allergy medications twice a day to manage her symptoms.

We live in a world where facts and fiction get blurred
In times of uncertainty you need journalism you can trust. For 14 free days, you can have access to a world of in-depth analyses, investigative journalism, top opinions and a range of features. Journalism strengthens democracy. Invest in the future today. Thereafter you will be billed R75 per month. You can cancel anytime and if you cancel within 14 days you won't be billed.
Subscribe to News24
Related Links
How close are we to a cure for peanut allergy?
Treatment may allow allergic kids to eat eggs safely - study
No link between mom-to-be's diet, baby's allergy risk
Next on You
You've been washing your hands wrong your whole life – here’s how to do it properly